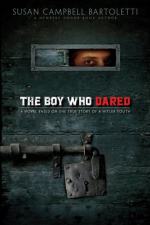 The Boy Who Dared Summary & Study Guide includes comprehensive information and analysis to help you understand the book. This study guide contains the following sections:

This detailed literature summary also contains Quotes and a Free Quiz on The Boy Who Dared by Susan Campbell Bartoletti.

The Boy Who Dared is a fictional account of a real-life story. Based upon the inspiring yet tragic life of Helmuth Hubener, the story accounts the bravery and cunning of one boy against the unfathomable oppression of the Nazi regime during World War II. As Hitler rises to power, Helmuth's life is dramatically altered and his community changed forever. While some remain silent, Helmuth battles his inner convictions to find his voice and fight while avoiding arrest. His story is truly an inspiration for youths similarly struggling against tyranny and injustice, even today.

The story begins with Helmuth facing execution in Plotzensee prison in 1942. Through a series of flashbacks, he evaluates his life and what led him to his current situation. Awaiting execution at any time, he has spent almost a year in the prison, listening to others led to their deaths at the guillotine. Throughout the recollections of his life, there are flash-forwards to his final day in prison before being executed.

The first flashback takes us back to when Helmuth Hubener is just three-years-old. Germany is still reeling from the effects of World War I. As punishment for their involvement, the Treaty of Versailles imposes strict reparations, to the detriment of their labor force, food supplies and most notably, their status within the European community. Once a powerful country, they are reduced to a lackluster shadow of their former glory. Hitler seizes upon the opportunity to offer the Germans a chance to redeem themselves. In reclaiming their wealth and sense of national pride, the rest of the world will be forced to take notice. Helmuth's first recollections in the book are of a parade to celebrate the re-emergence of Germany as a united nation. He is overcome with the pageantry and pride of the event, sparking his interest in serving the Fatherland and making his citizens proud as a "good German".

By the time Helmuth reaches middle-school, the lines between the government and every day life have blurred. Lessons revolve around Nazi ideals and individual sacrifice for the greater cause of Hitler's objectives. Being a dedicated and pure German is held as a high ideal. More and more, Helmuth discovers that Hitler uses the ideals of the Fatherland to further his own personal agenda of world domination. Hitler finds scapegoats for the woes of the Germans - first the Communists, then the Jews and eventually all the Allies. Constantly on the attack, he uses paranoia to pit neighbor against neighbor, asking all to constantly prove their devotion to his cause.

As a teenager, Helmuth finally rebels by seeking forbidden radio broadcasts from beyond the German borders. When he learns the truth of German losses and war atrocities, he cannot be a silent follower any longer. He organizes a group of friends to join him in distributing anti-Nazi literature throughout Hamburg. As he plans to expand distribution and seeks help from a French-speaking co-worker, he is arrested by the Gestapo for treason. To help reduce the sentences of his friends and accomplices, Helmuth assumes full blame for the treasonous acts and is sentenced to death. His friends receive severe sentences, but their lives are spared.