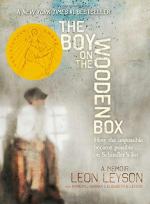 The Boy on the Wooden Box Summary & Study Guide

Leon Leyson
This Study Guide consists of approximately 25 pages of chapter summaries, quotes, character analysis, themes, and more - everything you need to sharpen your knowledge of The Boy on the Wooden Box.

The Boy on the Wooden Box Summary & Study Guide Description

The Boy on the Wooden Box Summary & Study Guide includes comprehensive information and analysis to help you understand the book. This study guide contains the following sections:

This detailed literature summary also contains Topics for Discussion on The Boy on the Wooden Box by Leon Leyson.

Leon Leyson began his life in a small village in Poland. Life was fairly carefree for Leyson, filled with summer days playing in the river and adventure games played out with friends. At the age of eight, Leyson and his family moved to Krakow where his father worked in a glass factory. The city was an adventure for Leyson in the beginning, but when the war began, life became complicated for him and his family.

Assuming the German soldiers would be much like they were during World War I, when the Germans invaded Poland, Leyson’s father decided that it would be safe to leave his wife and children in Krakow, but he and his eldest son should return to their home village ahead of the Germans. Leyson’s father returned a short time later, having had second thoughts about abandoning his family. His eldest son, Hershel, returned to the home village alone. A short time later, Leyson’s father was arrested and held in a local prison for several weeks, leaving the family without money and a means to get food.

When Leyson’s father was released from prison, he returned home broken and without a job. He was able to secure a job a short time later when he opened a locked safe for the new German owner of a local factory. Leyson’s father was given a job at this factory. He was not paid, but he was given a work pass that allowed him and his family to remain in Krakow when the Germans purged the city of all but fifteen thousand workers. The man his father worked for was Oskar Schindler.

A short time later, the remaining Jews were transferred to a closed off ghetto at the edge of the city. The ghetto was so crowded that there were sanitation and disease problems. However, they managed to survive until the Nazis decided it was time to purge even the ghetto. The Nazis at first asked for volunteers to agree to move into the ghettos in the countryside. Soon, however, they were forced to board trains to these new ghettos. Jews who had managed to escape these new ghettos and return to the city told horror stories of concentration camps. Soon the people were afraid to get on these trains. Unfortunately, Leyson’s elder brother, Tsalig, was put on one of these trains and refused an opportunity to escape because his girlfriend was on the train as well.

Eventually the ghetto was completely cleared out and the Jews were taken to the work camp, Plaszow. Leyson had a hard time in this camp and was afraid he would not survive. Therefore, when he learned that Schindler had written a list of new workers he wanted moved to his sub-camp at his factory but that his name was crossed out, he arrived at the line leaving for the sub-camp and demanded to be taken. He was allowed to go.

Leyson worked at Schindler’s factory for eight months. However, the Germans began to lose the war and Germans were fleeing Poland. Schindler’s factory was to be torn down and moved to Czechoslovakia. Leyson and his family were among the workers allowed to go. When the war came to a close, Schindler gave each of the Jews a bolt of clothing and a bottle of vodka so that they might trade them after their release. He then fled to the American lines.

Leyson and his parents immigrated to America while his sister and surviving brother immigrated to Israel. Leyson would go on to serve in the military and achieve a higher education. He would be a teacher for nearly forty years and marry, bringing two children into the world. Leyson rarely talked about his childhood and experiences in World War II. However, when the book, Schindler’s List, came out, Leyson found himself sharing his story in small and large venues. He also learned more about Schindler than he had known before, making him more of a hero in his mind. Leyson would die in 2013 after a three year battle with cancer.

More summaries and resources for teaching or studying The Boy on the Wooden Box.

The Boy on the Wooden Box from BookRags. (c)2022 BookRags, Inc. All rights reserved.