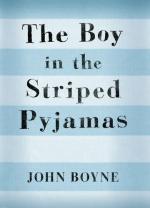 The Boy in the Striped Pyjamas Summary & Study Guide

John Boyne
This Study Guide consists of approximately 26 pages of chapter summaries, quotes, character analysis, themes, and more - everything you need to sharpen your knowledge of The Boy in the Striped Pyjamas.

The Boy in the Striped Pyjamas Summary & Study Guide Description

The Boy in the Striped Pyjamas Summary & Study Guide includes comprehensive information and analysis to help you understand the book. This study guide contains the following sections:

This detailed literature summary also contains Topics for Discussion and a Free Quiz on The Boy in the Striped Pyjamas by John Boyne.

The Boy in the Striped Pajamas is a young adult novel by writer John Boyne. In this novel, a young boy is frustrated when he learns that his family has been forced to relocate due to his father's new job in the German military. The family's new home is in the middle of nowhere where young Bruno has no one to play with and nothing to do with the exception of exploring the boundaries of the odd fenced-in compound next door to the family's home. In the end, Bruno does make a friend, but this friend is trapped behind the fence, destined to never play with Bruno with the abandon of most kids their age. The Boy in the Striped Pajamas is a look at the Holocaust through the eyes of a child who comes to see the unfairness of it in a way only innocence can reveal.

Bruno comes home from school one day to discover that his family is preparing to move. Bruno has always lived in Berlin and therefore he is greatly distressed by this move. Bruno's distress increases when he discovers the family will be moving to a house in the middle of nowhere that is much smaller than their previous house. Bruno begs his father to allow them to return to Berlin, but Bruno's father explains that the job has been given in this new place is a very important job and that it is imperative to his father's career that they all remain where they are.

Bruno can see out his bedroom window an odd-fenced compound next door to the family's home where hundreds of children appear to live. When Bruno shows this view to his sister, they both realize that the people are not all children, but they appear to be because the clothing they are wearing looks like striped pyjamas. Bruno wonders who these people are, but no one seems willing to talk about them.

As part of his father's job, there seem to always be soldiers around the house. One morning, Bruno decides to build a tire swing in the front yard. One of the soldiers orders an elderly man, a servant in the house, to help Bruno. Later, when Bruno falls from the newly constructed swing, the servant comes to his aid. This servant, Pavel, cares for Bruno's wounds. When Bruno asks about his knowledge, Pavel reveals that he was a doctor before the war. Bruno is confused as to why Pavel no longer works as a doctor. Maria, the family's maid, tells Bruno that Pavel cannot work as a doctor any longer because he is a Jew.

A short time later, Bruno begins exploring the fence that divides his family's property from the compound next door. When Bruno has walked for what seems like hours, he comes across a young boy about his own age. This boy, Shmuel, lives on the other side of the fence. Shmuel tells Bruno how he once lived above his father's watch store, but the soldiers came and first moved his family into a single room they were forced to share with many others and then brought them to this camp.

Bruno and Shmuel begin meeting nearly every day after Bruno's lessons. Bruno often brings Shmuel food, when he does not eat it himself on the long walk, because Shmuel seems hungry. Then one day Bruno is surprised to find Shmuel in his house, given the job of cleaning the fancy glasses owned by Bruno's mother. Shmuel gets into trouble after eating some chicken Bruno gave him. Bruno was afraid to tell the truth, allowing the soldier to believe Shmuel stole the chicken.

To make amends to Shmuel for lying about the chicken, Bruno hatches a plan to go into the compound dressed like Shmuel to help while Shmuel looks for his father. On that day Shmuel and Bruno search the entire compound for Shmuel's father, but never find a single clue. Finally Bruno decides he must go home for dinner. However, Bruno and Shmuel find themselves in the middle of a large group of people when the soldiers come and force the people into a small building. Shmuel and Bruno hold hands as people begin to panic in the small room.

Bruno's parents search frantically for Bruno for weeks after he disappears. Finally Bruno's mother returns to Berlin with his sister. A year after his disappearance, Bruno's father visits the place where Bruno left his clothing, finally realizing what happened to his son. When the Allied soldiers come a few months later, Bruno's father no longer cares what they might do to him.

More summaries and resources for teaching or studying The Boy in the Striped Pyjamas.

The Boy in the Striped Pyjamas from BookRags. (c)2022 BookRags, Inc. All rights reserved.