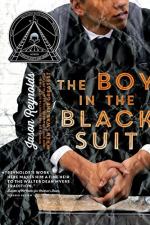 Related Topics
Patina
As Brave as You
Look Both Ways

The Boy in the Black Suit Summary & Study Guide

Reynolds, Jason
This Study Guide consists of approximately 50 pages of chapter summaries, quotes, character analysis, themes, and more - everything you need to sharpen your knowledge of The Boy in the Black Suit.

The Boy in the Black Suit Summary & Study Guide Description

The Boy in the Black Suit Summary & Study Guide includes comprehensive information and analysis to help you understand the book. This study guide contains the following sections:

This detailed literature summary also contains Quotes and a Free Quiz on The Boy in the Black Suit by Reynolds, Jason .

The following version of this book was used to create this study guide: Reynolds, Jason. The Boy in the Black Suit. Simon and Schuster Children's Publishing Division, New York. 2015.

As the novel opens, Matt Miller is beginning his senior year of high school several weeks after school has opened. He spent the first weeks of school tending to his mother as she struggled with breast cancer. He then organized her funeral. When Matt returns to school, he notes that everyone treats him differently. It is clear that they do not know what to say to him, and Matt resents that his classmates act as if his tragedy might be contagious. He quickly realizes that the drama of high school is no longer important to him. His mother's death has made him aware of what is really important to life.

Matt's best friend is Chris. Though Chris is awkward with Matt, he makes it clear he is willing to do anything he can to help Matt cope. Matt only wants Chris to treat him normally and Chris sets in to do that.

Matt only takes classes in the mornings, as he had planned to work in the bank during the afternoon. He lost that position when he missed the first weeks of school, so he sets out to find another job. He applies at a local fast food restaurant called the Cluck Bucket. While he is filling out the application, Mr. Ray arrives to pick up a large order of chicken. Mr. Ray owns the funeral home that handled the services for Matt's mother, Daisy. When he learns Matt is looking for a job, Mr. Ray offers to hire him to help around the funeral home. Matt is hesitant at first, but he eventually accepts Mr. Ray's offer.

Matt begins having dreams about his mother's funeral. Often, in the dreams, his mother is alive. Sometimes Matt's father is trying to get into the church. At other times, Matt and his mother are alone. His father, Jackson, does not talk to Matt about their shared grief. Jackson, who had been sober for years, begins drinking heavily. One night, he staggers into traffic and is hit by a cab. He spends weeks in the hospital, recovering from the injuries.

Matt quickly learns that watching the grief of other people helps him cope with his own grief. He discovers that there is always one person in attendance who grieves completely and openly, just as Matt had during Daisy's funeral. He begins to search for that person and to take comfort in their grief. During Gwendolyn Brown's funeral, Matt knows the person who will fall apart is Love Brown, Gwendolyn's granddaughter. Though Love cries, she does not break down as Matt expects. He is intrigued and sets out to learn her secret. The two begin a relationship and Love reveals that her mother was murdered one Valentine's Day evening. Matt is startled to realize that he had witnessed that murder.

Matt and Love begin spending more time together. One day, Love takes him to the Botanical Gardens. Matt hates flowers because he sees them as a symbol that everything dies. Love takes photographs of the flowers as a means of keeping their memory alive. Matt also spends more time with Mr. Ray and learns that Mr. Ray's wife had died young in a freak accident and that Mr. Ray had lost a promising basketball career because of a broken knee. When Mr. Ray has a day away from the funeral home, he spends it thinking about life and death, and he seems to come to terms with his own losses.

As the novel nears its conclusion, Matt is helping with the funeral for Andre, a young boy from the neighborhood. Matt is waiting for the moment when Andre's mother breaks down when Love texts him, insisting that he come outside. She gives him a plant as a gift. Though Matt realizes he lost the chance to see Andre's mother's grief, he feels a level of peace he has not experienced since his mother's death.

More summaries and resources for teaching or studying The Boy in the Black Suit.

The Boy in the Black Suit from BookRags. (c)2022 BookRags, Inc. All rights reserved.