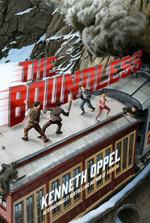 The Boundless Summary & Study Guide includes comprehensive information and analysis to help you understand the book. This study guide contains the following sections:

This detailed literature summary also contains Quotes and a Free Quiz on The Boundless by Kenneth Oppel.

Will Everett arrives at the train station, Farewell, waiting for his father, James, to return from laying down rails. Will runs into a circus worker, Maren, who notices that he’s a skilled artist. She takes a Sasquatch tooth that his father had given him, intending to return it when he sees her at the circus. Will never makes it to the circus though, as he runs into a rich man named Van Horne, who happens to be the owner of the rails that his father is working on. Will is craving adventure, so he goes with Van Horne to surprise his father.

Will meets up with his father who is finishing his last day of work. There’s only one final rail spike that needs to be laid, one that Van Horne had made out of solid gold. One of the workers, Brogan, sees the gold spike as an insult, as they have been working for some time without getting paid. A photographer, Mr. Dorian, is there to take pictures of the event. An avalanche interrupts the ceremony, and in the chaos Brogan tries to steal the golden spike. Brogan is stopped by a pair of Sasquatch. The mother is killed, but the child is spared and taken in by Mr. Dorian, who reveals that he owns a circus.

Will fast forwards three years. Van Horne has passed away, but named Will’s father as the chief engineer. Before his death he created the world’s largest train, the Boundless. He has a special funeral car near the end of the train where many of his treasures rest. Will is having a hard time adjusting to his newfound wealth. He tells his father that he wants to become an artist and go to college in San Francisco, but his father tells him that he’s going to work on the rails just like he did.

Mr. Dorian and his circus are performing on the train, where Will runs into Maren again. Even though it has been three years he’s still infatuated with her. He doesn’t get the chance to speak with her though during the performance. The next day, Will is exploring one of the shanty towns they’ve stopped at. While there, he witnesses Brogan, disguised as a train worker, killing one of the guards. Will gets the key from the guard that unlocks Van Horne’s train car.

Brogan chases after Will, but he escapes and ends up in the circus part of the train. Mr. Dorian helps Will out and decides to disguise him as one of his performers. Will wants to go right to his father, but he knows Brogan has more men scattered throughout the train. He also gets the chance to meet with Maren again which encourages him to stay. He doesn’t have many talents, but they realize that he’s a skilled artist. They set up an act where he wears a false blindfold and pretends to be a psychic artist.

Will eventually finds out that Mr. Dorian plans to rob the train himself. He wants a canvas inside that had supposedly been soaked in the fountain of youth. Dorian needs it because he only has a few days left to live. Will is hesitant at first, but decides that he owes Dorian his life. Maren also tells him that she’s going to be released from her contract and given a substantial sum of money if she helps.

The group has to dodge Brogan while they put on their performances, but eventually end up getting close to the train car containing Van Horne’s treasures. They manage to break inside, but Brogan had been tailing them. Mr. Dorian tricks Brogan into setting off the traps, stealing the canvas and leaving Brogan trapped in the car. Unfortunately, Brogan’s men are waiting outside. Mr. Dorian also had his circus performers waiting. The two groups face off, with most of Brogan’s men being dispatched.

Mr. Dorian feels his heart giving out so he has Will draw his portrait. Will manages to complete the portrait, but it doesn’t actually do anything and Mr. Dorian passes away. Brogan and his one remaining man try to steal the train car, but Will manages to stop him. The train gets hit by an avalanche and Brogan is killed by the baby Sasquatch that Mr. Dorian had rescued three years ago. Maren is arrested afterwards, but she manages to use her skills to escape. James tells Will that he’ll support him going to art college, but Will changes his mind when he gets a message from Maren. She tells him that Mr. Dorian left the deed to the circus to her. He intends to go to San Francisco and join her.

The Boundless from BookRags. (c)2022 BookRags, Inc. All rights reserved.