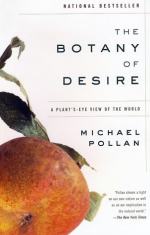 Related Topics
How to Change Your Mind

The Botany of Desire Setting & Symbolism

Michael Pollan
This Study Guide consists of approximately 41 pages of chapter summaries, quotes, character analysis, themes, and more - everything you need to sharpen your knowledge of The Botany of Desire.

The apple is the primary subject of Chapter 1 of the text. The apple is the fruit of the apple tree, or Malus domestica, which is one of the most widely-cultivated fruit trees in the world. The tree is small and deciduous, and comes from an original range in Kazakhstan. Apple trees do not breed true from seed, and thus nearly all modern domestic or garden apple trees are established by grafting material taken from well-known cultivars.

The Red Delicious and Gold Delicious apples are two widely-recognized cultivars of Malus domestica. In the modern world, they are the two most-popular apples available. The Red Delicious was discovered by Jesse Hiatt in Peru, Iowa. Originally naming the variety Hawkeye, Hiatt entered the cultivar in a 1893, contest. The Hawkeye was the winning entry and the contest moderator, C. M. Stark, re-christened the...

More summaries and resources for teaching or studying The Botany of Desire.

The Botany of Desire from BookRags. (c)2022 BookRags, Inc. All rights reserved.