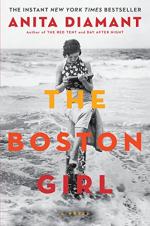 Anita Diamant
This Study Guide consists of approximately 32 pages of chapter summaries, quotes, character analysis, themes, and more - everything you need to sharpen your knowledge of The Boston Girl.

This detailed literature summary also contains Quotes and a Free Quiz on The Boston Girl by Anita Diamant.

“The Boston Girl” is a historical novel by Anita Diamant which takes the format of a casually-related oral autobiography from main character and principal protagonist Addie Baum, to her granddaughter, Ava, who is studying to be a rabbi.

Addie is born in 1900 to Jewish-Russian immigrant parents in Boston, Massachusetts. Her parents are very traditional, especially her mother. Her mother sees Addie’s two older sisters as aberrations: Betty lives on her own and works, and is very pro-American. Celia is beautiful and feminine but unmarried at 29. As Addie moves through her teenage years, she watches as Celia gets married and dies, and watches as Betty marries Celia’s widowed husband, and they thrive financially. Addie’s mother is not thrilled about the paths her daughters have followed in life, but is nevertheless thrilled when both of them get married. To their mother, there is no greater purpose for a woman other than to marry and bear children.

As a teenager, Addie falls in with a good group of friends at the library and begins working for Celia’s husband as a secretary in his factory. Most of the friends that Addie makes through her time at the library become lifelong friends, and they introduce her important and famous figures fighting for social change. At the same time, Addie moves into real estate with Celia’s husband, and then strikes out on her own, taking secretarial work at a newspaper.

At the newspaper, Addie later moves into writing and advocating for social issues, some of which eventually get her into trouble, and get her fired. Addie, however, is undaunted. She continues to write and advocate for social change, and continues to visit with her friends. In her mid-20s, Addie meets Aaron Metsky, a kind and gentle lawyer advocating for social reform, and the two quickly fall in love and become engaged. Their marriage is postponed for a while as Aaron finishes up his current spate of social work, and prepares to relocate to Boston in order to be with Addie.

In Boston, Addie’s mother is both delighted that Addie is going to be married, but also careful of her future son-in-law, as any good mother would be. Before the wedding, Addie’s mother has a heart-attack. Before she dies, Addie’s mother tells Addie that she is sorry if she has ever hurt Addie, and that she only ever wanted the best for her children. As a result, Addie and her mother reconnect and reconcile before she dies. Addie later marries Aaron. They have two granddaughters and five grandchildren. Aaron supports all of Addie’s endeavors.

Addie eventually writes a book about sexual experiences and pregnancy of girls which earns her a teaching position at Boston University Aaron dies in the early 1980s, a staunch liberal Democrat, and Addie gives the account of the story of her life – what becomes the novel – to her granddaughter, Ava, in 1985.

More summaries and resources for teaching or studying The Boston Girl.