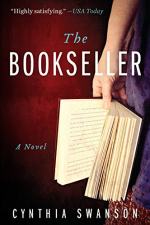 Cynthia Swanson
This Study Guide consists of approximately 69 pages of chapter summaries, quotes, character analysis, themes, and more - everything you need to sharpen your knowledge of The Bookseller.

The Bookseller Summary & Study Guide includes comprehensive information and analysis to help you understand the book. This study guide contains the following sections:

This detailed literature summary also contains Quotes and a Free Quiz on The Bookseller by Cynthia Swanson .

NOTE: All citations in this Study Guide refer to the Kindle version of The Bookseller, published March 3, 2015.

Sometimes the brain deals with changes in one’s life, particularly traumatic changes, by creating an alternate life, Katharyn “Kitty” Miller learns in the novel The Bookseller by Cynthia Swanson. Kitty begins to dream about a life where she is married with three children, a reality different from her life as a single woman who co-owns a bookstore. As Kitty’s dreams become more and more realistic, she begins to question if they are really dreams at all.

Kitty’s life rotates on a single event when she put a personal ad in the newspaper seeking a boyfriend. Lars Andersson was the only one who answered her ad who seemed suitable. They spoke on the phone before meeting in person. Because she was going through a phase where she wanted to seem more mature, Kitty introduced herself to Lars as Katharyn. Kitty remembers arranging to meet Lars in a coffee shop before they ended their phone call. She waited for him at the shop but he never showed up. Believing she had been stood up, Kitty left the shop and embraced her life as a single woman and co-owner of a bookstore with her best friend, Frieda. Kitty later learns Lars died of a heart attack just after they talked on the phone.

Kitty is surprised years after the personal ad incident when she suddenly begins waking up in a world where she is known as Katharyn. In that life she is married to Lars. They have three children, triplets. They live in a house that Lars’ designed just for them and even have a maid to help with cleaning. Katharyn does not work but instead stays home with the children. In this version of her life, Lars did not die of a heart attack because Katharyn had sensed what was happening when they were talking and had gotten paramedics to Lars in time to save his life.

As Kitty finds herself immersed more and more often in what she believes is her dream world she begins to learn troubling things about herself and her life as Katharyn. One of her sons is autistic. After researching the causes of autism she learns that specialists believe the disorder is caused because a child was deprived of its mother’s love during early years of development. She also learns that she and Frieda had a fight when Katharyn decided to stay home with her children instead of helping Frieda keep the bookstore open. Most upsetting to Katharyn is that her parents were killed in a plane crash when they flew back to Denver from their visit to Hawaii.

Themes in this novel, which has a twist at the end, include the different ways people react to changes in their lives. Also of importance in the novel are the themes of treating people fairly despite their race, understanding autism, and the joy that can be found in teaching a child to read.

More summaries and resources for teaching or studying The Bookseller.

The Bookseller from BookRags. (c)2022 BookRags, Inc. All rights reserved.