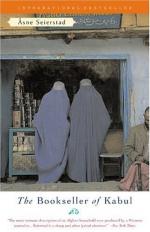 Åsne Seierstad
This Study Guide consists of approximately 22 pages of chapter summaries, quotes, character analysis, themes, and more - everything you need to sharpen your knowledge of The Bookseller of Kabul.

The Bookseller of Kabul Summary & Study Guide includes comprehensive information and analysis to help you understand the book. This study guide contains the following sections:

This detailed literature summary also contains Topics for Discussion and a Free Quiz on The Bookseller of Kabul by Åsne Seierstad.

The Bookseller of Kabul by Asne Seierstad is the story of the Sultan Kahn family. The book tells the story of how people cope with the trials and tribulations of everyday life in a country with oppressive customs and traditions. The author lives with the Kahn family in their small crowded apartment to experience everyday life and to gather information for the book. In doing so, she reveals the oppressive nature of the life of Afghani women.

Sultan Kahn is a bookseller. He receives training as an engineer but gives up that career because of his interest in books. He loves books from the time he is a child. As a student, he buys textbooks in Tehran and sells them in Kabul for a handsome profit. Eventually, he goes to Tehran and Pakistan, buys many crates of books and returns to Kabul and opens a bookstore. He prospers.

Sultan believes in making most all kinds of books available He wants to protect Afghan history and culture and therefore does not adhere to the rules of the Soviets or fundamentalists as to what is forbidden. As a result of this, he is imprisoned several times and his books are burned, but he always recovers. He protects the history and culture of his country by hiding thousands of books in attics around Kabul. At one point, his wife Sharifa spends a year living in Pakistan running a part of the book business from there during a bad period in the war.

Sultan has three bookstores in Kabul. He considers himself to be a rich man He is born to a poor family in a village outside of Kabul and is self made. He moves his family into a block of Soviet style apartments during the Soviet occupation. At this time, they are luxury middle class apartments. After all of the years of fighting there is little water and electricity in the apartments. Between eleven and thirteen people live in the four room apartment and one room is used exclusively as a storeroom.

All of these people living in such a small apartment are not happy. Seierstad looks at the lives of these people and the oppressive life of women. They have no choice in the selection of a husband or much else. Under the rule of the Taliban, they are forbidden to work and cannot go out without wearing the burka. Sultan is an authoritative person who demands respect and obedience. No one in the family dares to disobey him. As a result of this, they are all unhappy.

The Bookseller of Kabul is fascinating reading. The author portrays the everyday lives of the people under three different kinds of repressive regimes and the struggles of one man to do what he could to preserve the history and culture of his country.

More summaries and resources for teaching or studying The Bookseller of Kabul.

The Bookseller of Kabul from BookRags. (c)2022 BookRags, Inc. All rights reserved.