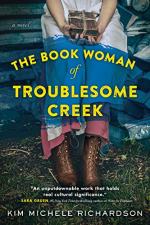 Kim Michele Richardson
This Study Guide consists of approximately 84 pages of chapter summaries, quotes, character analysis, themes, and more - everything you need to sharpen your knowledge of The Book Woman of Troublesome Creek.

This detailed literature summary also contains Quotes and a Free Quiz on The Book Woman of Troublesome Creek by Kim Michele Richardson.

The following version of novel was used to make this guide: Richardson, Kim Michele. The Book Woman of Troublesome Creek. Naperville, Illinois: Sourcebooks Landmark, 2019. This historical fiction novel is 47 chapters long, but for the purposes of this guide is broken into six sections.

The novel opens in Kentucky, 1936 without a chapter title, with a short introduction. A librarian on a mule sees a dead man dangling on a rope in front of her, with a baby crying below. A sock falls off his blue foot.

Chapter One begins in 1936, but before the introduction. Cussy Mary and her Pa wait for Cussy’s suitor to come by in their log cabin. Cussy and Pa talk about her job as a pack horse librarian, bringing books to the people in the mountains of Kentucky, as part of her work for the WPA during the Depression. They argue over her job, Pa saying a respectable woman should not work, Cussy claiming no one would marry a Blue - a woman with blue skin. Pa is worried since he is a coal miner, and getting sick. A few weeks later Pa arranges for Charlie Frazier to marry her, and he rapes and beats her until one day he has a heart attack and dies. Cussy comes home to heal, self-induces an abortion, gets her job back, and a mule named Junia.

Cussy begins her route one day to deliver her books and magazines, and one of her patrons, Angeline Moffit is pregnant and her husband Willie Moffit has been shot in the foot. He is dying and needs help. Later that day she is assaulted in the woods by the Preacher Vester Frazier, a cousin of Charlie, though Junia saves her. She also delivers books to Jackson Lovett, a new man on her route that is very kind to her and Junia.

A few days later, she heads to the library Center, where she goes once a month to pick new books and magazines. The women in the Center do not touch her because of her color, and she cannot use the bathrooms because she is colored. Jackson sees Junia and Cussy at the building and flirts with them both. She runs into her friend Queenie, another Pack Mule Librarian who is Negro. She gets her new materials and gets back on the road. She visits a school where a child named Henry (who is frail and starving) gives her a special gift. She also visits the wife of a local moonshiner, and Loretta Adams who is nearly blind and Cussy reads to her. All the while, Cussy feels Vester Frazier in the woods around her, hunting her.

One night Cussy hears Junia scream and a shotgun blast, and running outside finds her Pa over Vester Fraizer’s body. They bring the Doc over and he pronounces Vester dead, but warns them now two Fraziers (one a pastor) have died with a Blue, and people will hang them. Pa agrees to a trade - Doc can take Cussy to Lexington to give skin and blood samples if Doc agrees not to tell anyone about Vester. A few days later Doc picks up Cussy and takes her to Lexington, where they drug her and take skin, blood, and tissue samples while she sleeps. Doc gives her medicine for her scrapes and bruises, and Cussy decides to give it all to Mr. Moffit. Angeline takes the medicine gratefully.

Back on her route, Cussy visits with Jackson, sees Henry grow emaciated, talks Devil John into taking more materials, and delivers a disappointing letter to R.C. People in town are starting to talk about Vester Frazier’s whereabouts, but also the upcoming Pie Bake Dance. Her father has disappeared and Cussy fears the worst - that the Company nabbed him for his union organizing activities. At the Center, Queenie has gotten a new job in Philadelphia, and hands Cussy a letter from her Pa. One night Cussy wanders into town and sees the Pie Bake happening, and is assaulted but is saved by the Sheriff. Doc takes her back to Lexington to tell the doctors about her family history and give more samples.

Doc finds a temporary cure for the Blues - diagnosing them with methemoglobinemia and giving them a drug that can make Cussy temporarily white, but that also makes her faint and vomit. The reception for her new color is mixed - people either think she is sick or say they miss her blue color. At the Independence Day celebration she tries to join the sewing circle now that she is white but the women reject her, and she leaves embarrassed. Soon afterwards she stops taking the medicine. Back on her route, she sees Henry at home since he is too sick to go to school. Devil John appreciates his new materials, and soon Cussy gets a letter from Queenie in Philadelphia.

On her route again, she sees a blue hanging body with a baby lying below. She runs inside and holds Angeline while she dies after giving birth, and promises to care for the new baby Honey, since Willie is now dead too. Jackson buries them. A few weeks later, Jackson comes by courting and proposes to Cussy and she accepts, but that same night Pa is brought home dead, having died in the mine a week before the mine is going to close. They bury Pa in the family cemetery. A few months later they get married in the courthouse, but as they leave the Sheriff stops them, arresting Jackson for violating Kentucky miscegenation laws. Jackson fights back but they beat him and put him in jail, despite Doc vowing Cussy just has a blood disorder. The novel ends with a letter four years later from Cussy to Queenie, explaining how Honey is now four years old, and Jackson is out of jail but cannot live in Kentucky and so together the family is looking for a new place to live.

More summaries and resources for teaching or studying The Book Woman of Troublesome Creek.