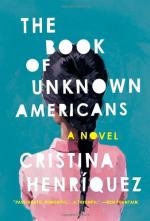 Cristina Henríquez
This Study Guide consists of approximately 45 pages of chapter summaries, quotes, character analysis, themes, and more - everything you need to sharpen your knowledge of The Book of Unknown Americans.

The Book of Unknown Americans Summary & Study Guide includes comprehensive information and analysis to help you understand the book. This study guide contains the following sections:

This detailed literature summary also contains Quotes and a Free Quiz on The Book of Unknown Americans by Cristina Henríquez.

NOTE: Due to the structure of this novel, the book has been divided according to chapters based on page numbers. This study guide specifically refers to the 2014 Borzoi Book/Alfred A. Knopf hardcover edition, sixth printing, January 2015. Accordingly, quotes reference the appropriate page numbers as well as paragraph numbers.

“The Book of Unknown Americans” is a contemporary American novel of Latino immigration by Cristina Henriquez. The novel primarily revolves around a romance between two Latino teenagers – Maribel Rivera from Mexico, and a Mayor Toro from Panama – and how Maribel and her family handle living in a new country. Woven throughout the novel are short vignettes in the lives of the people who live at the Redwood, revealing how they came to be in America. Among them is Micho Alvarez, who says that Latinos are the unknown Americans, because no one wants to get to know them, either because they are scared of Latinos, or need somebody to hate.

When the novel begins, Maribel and her parents, Arturo and Alma, have legally come to Wilmington, Delaware, in order to have a chance at a better life. But unlike many immigrants, Arturo and Alma do not merely have finances in mind. Indeed, back in Mexico, they own their own home and Arturo managed a construction business. Instead, the Riveras are in the United States to give their daughter access to America’s special education services. The 15-year-old Maribel previously fell off a ladder at her father’s job site, causing tremendous swelling and shaking of her brain, and leading to neuron detachment. This in turn caused Maribel to become mentally slowed. The Riveras hope specialized education can help to restore Maribel’s mind, though they know she will never be the exact same person again.

The Riveras take a unit at the Redwood Apartments, an old auto-body shop. Alma will be a homemaker while Arturo travels across the Delaware state border into Pennsylvania to work on a mushroom farm. The Riveras soon meet a host of neighbors, including the Toros, Panamanians who are full-fledged American citizens, and who love the United States deeply. Rafael and Celia Toro have two sons. The older, Enrique, is away at college in Maryland, while the younger, Mayor, is 15 and a sophomore in high school. The Toros and the Riveras become fast friends, with Mayor instantly falling for the radiantly beautiful Maribel, and being very patient with Maribel’s learning disabilities. In fact, he discovers that, although she is slow sometimes, and forgetful here and there, she is largely competent and capable of doing things. She is still much brighter than most people think. However, Maribel has also caught the eye of Garrett Miller, a bully and a troublemaker, who attempts to sexually molest Maribel, but is stopped by Alma. Alma, who blames herself for Maribel’s accident, for she was holding the ladder on which Maribel climbed, does not tell anyone about the incident, because she believes she can handle it.

Ultimately, Maribel comes to fall in love with Mayor, telling him that he is the only person who truly sees her as a person. His patience with her, and his refusal to treat her like a brainless child, earns him her respect. Maribel, through special education at school, and through Mayor’s care, begins to improve. Mayor and Maribel grow closer together, ultimately kissing passionately and letting their hands explore one another in Mayor’s father’s car. They are seen by a neighbor, and the Riveras forbid Mayor from seeing Maribel again. Nevertheless, Mayor sneaks Maribel out of school, and brings her to the ocean in his father’s car. On the way back, they must pull over to the side of the road during a snowstorm, and both fall asleep. When they wake up, it is after one in the morning. Alma believes that Garrett is responsible, and Arturo seeks Garrett out. When Mayor and Maribel return to the apartment building, Mayor’s father brings them to the hospital. Arturo, out looking for Maribel, has been shot by Garrett’s father. He dies that night. A few days later, Maribel and Alma move back to Mexico.

More summaries and resources for teaching or studying The Book of Unknown Americans.

The Book of Unknown Americans from BookRags. (c)2022 BookRags, Inc. All rights reserved.