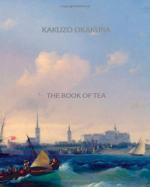 Okakura Kakuzō
This Study Guide consists of approximately 19 pages of chapter summaries, quotes, character analysis, themes, and more - everything you need to sharpen your knowledge of The Book of Tea.

The Book of Tea Summary & Study Guide includes comprehensive information and analysis to help you understand the book. This study guide contains the following sections:

This detailed literature summary also contains Topics for Discussion on The Book of Tea by Okakura Kakuzō.

The Book of Tea by Kakuzo Okakura is a short volume that explains the unique tradition of the Japanese tea ceremony, from utensils used at the ceremony to historical context.

In the late-19th and early-20th centuries, Japan underwent a period of modernization. Some conservatives opposed such modernization and wished to preserve the old ways. One of these was this book's author, Okakura. He founded the Japanese Art Institution in Tokyo and later became a curator at the Boston Museum of Fine Art. He had an unparalleled knowledge of Oriental art, and it is because of men like Okakura that so much of Japanese heritage has been handed down. One aspect of this heritage is the tea ceremony.

Tea began as a medicine and evolved into a beverage. Only relatively recently have Westerners come to appreciate the medicinal, spiritual, and meditative properties of tea. In the Eastern world, tea has gone through three distinct periods: the Boiled Tea era, the Whipped Tea era, and the Steeped Tea era. Each era reflected its culture in some way. During the Whipped Tea era, renowned tea master Lu Wu created the first Code of Tea, the Ch'a Ching, which paved the way for the formalized tea ceremony.

The tea room is an unadorned and small room, made of wood and bamboo. Artwork or flowers are brought in during each ceremony, to be focused and praised for artistry and beauty. Guests are silent and sober, and the taking of tea takes on a sort of quasi-religious ceremony. Ancestors are honored via the ancient tea utensils. The room and utensils are kept immaculately clean, as cleanliness is a duty of the tea-master. While the tea-master is an acknowledged artist, the guests must have the discipline to attain the proper mindset to appreciate the artistry of the ceremony. The ancient art of flower arrangement, referred to as the Cult of Flowers, is also an important aspect to the sparse decoration used for each ceremony.

Tea-masters feel that the art of the tea begins with themselves. As such, dress, behavior, walking style, and other personal factors are all carefully controlled. Dress is composed of dull colors, and behavior is subdued and deliberate.

More summaries and resources for teaching or studying The Book of Tea.

The Book of Tea from BookRags. (c)2022 BookRags, Inc. All rights reserved.