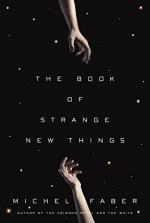 Michel Faber
This Study Guide consists of approximately 62 pages of chapter summaries, quotes, character analysis, themes, and more - everything you need to sharpen your knowledge of The Book of Strange New Things.

This detailed literature summary also contains Quotes and a Free Quiz on The Book of Strange New Things by Michel Faber.

• The Book of Strange New Things, by Michael Faber, study guide is written using the Kindle Version. All page numbers provided correspond to the e-version of the work.

The story opens with Pastor Peter Leigh driving to the airport with his wife, Beatrice Leigh. Peter is about to embark as a missionary for the mysterious group, the USIC. What makes Peter’s mission so special is the fact that he’s not just going to another country to preach the word of God. He’s going to another planet, the planet of Oasis.

Peter is torn about leaving because he misses his wife, but he knows that it’s an opportunity he can’t pass up. The USIC needed him immediately, although they never told him why it was so important that he gets to Oasis. When Peter arrives at the facility he finds out through his driver and the facility pharmacist, Grainger, that they barely know anything about the aliens. Peter calls them Oasans, but the rest of the facility simply refers to them as creatures or aliens. Grainger trades her medical supplies to the Oasans in exchange for their food, as the USIC has been unable to grow any of their own food on the planet.

Oasis has a unique tropical climate. The day and night cycle is roughly 72 hours long, so it’s sunlight for three effective Earth days. Rain is frequent, although only lasts for brief periods. The ground quickly absorbs any moisture, but the air is always hot and humid. The Oasans themselves are mostly humanoid in shape, except for their strange looking heads, which Peter initially finds disturbing. Peter learns that some of them can speak rudimentary English. Before Peter, there was another preacher, Kurtzburg, and also a linguist, Tartaglione. Grainger tells Peter that both of these men went missing, with some even believing that they were killed by the Oasans.

Peter begins to preach to the Oasans and finds out that they’re quite receptive to the word of the Lord. The Oasans identify themselves as Jesus Lover 1, 2, etc. With their help Peter begins to construct a church and gain more followers. Peter spends days with the Oasans during each trip, gradually becoming more familiar with their customs, and also starting to emulate them himself. He only returns to the USIC facility so he can communicate with his wife Bea via a communication device known as the Shoot.

Peter soon has to deal with the fact that things are going poorly on Earth. Bea frequently writes about natural disasters that are happening, and how the governments are failing. She also breaks the news to Peter that she’s pregnant with his child. Their relationship begins to grow strained as Peter spends more time with the Oasans. He simply isn’t able to relate to the troubles that his wife is going through because they feel so distant to him.

Peter finds himself craving more time with the Oasans. He feels trapped and uncomfortable whenever he’s at the USIC facility. He enjoys his time with the Oasans because they seem so much simpler to him. They don’t worry about drama or linger on the past. He finds their devotion to Jesus reassuring as well, as nobody else on the base seems to care much about God. Peter begins to notice that everyone on the base acts strangely. They don’t seem to care about anything going back on at home. They don’t fight amongst each other or form relationships. All they seem to care about is getting their jobs done and keeping the facility running.

Things between Peter and Bea continue to get worse. She’s hurt that with everything that’s going on he hasn’t offered to come home, and never asks about her pregnancy. Peter is torn between his duty and love for the Oasans and the responsibility that he feels towards his wife. When working with the Oasans, Peter gets injured and is written off as dead. He believes that his wounds are poisoned or otherwise infected, but that turns out not to be the case.

His injuries do make him delirious though, and he ends up wandering out towards an abandoned Oasan settlement. He runs into the missing linguist, Tartaglione. Tartaglione rants about how the USIC is building Oasis because they know the world is coming to an end. They specifically select workers that aren’t going to cause trouble and don’t have any passion. They just want people who do their job. Tartaglione points out that this is a terrible idea because it makes it impossible to repopulate because nobody cares about one another.

Peter is rescued by Grainger, who takes him back to the USIC facility. It’s there that Peter learns the Oasans thought he was doomed not because of poison, but because their bodies aren’t able to heal like humans. They didn’t realize he could recover from his wounds. One of the Jesus Lovers has come for treatment as they had injured their hand when working at the church.

Things continue to get worse for Bea, who reveals to Peter she’s given up not only on God, but their relationship as well. She just feels too much time has passed and they’ve grown too distance, and without her faith she can’t imagine that their relationship would work. Peter speaks with the injured Oasan, who seems to know that he has to leave. She remarks that he’s become exhausted. She doesn’t blame him though, telling him that he’s just meant to preach the word of God, he isn’t meant to be perfect.

Bea urges him not to come back because things have gotten so bad. Peter is determined to come back though. Both he and Grainger get permission to return to Earth, as she wanted to reconnect with her father and had simply grown tired of the way that the rest of the USIC personnel acted. Peter says his farewell to the Oasans, leaving his bible with them before returning back to Earth, hoping to reconnect with his wife.

More summaries and resources for teaching or studying The Book of Strange New Things.