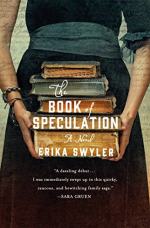 Erika Swyler
This Study Guide consists of approximately 45 pages of chapter summaries, quotes, character analysis, themes, and more - everything you need to sharpen your knowledge of The Book of Speculation.

The Book of Speculation Summary & Study Guide includes comprehensive information and analysis to help you understand the book. This study guide contains the following sections:

This detailed literature summary also contains Quotes and a Free Quiz on The Book of Speculation by Erika Swyler.

Simon Watson, a librarian, continues to mourn the loss of his parents years after their deaths. His mother, Paulina, a former carnival "mermaid," killed herself by drowning when he was just a boy and left him to watch after his little sister, Enola. His father, Daniel, was so devastated from her loss that he neglected everything else and slowly wasted away. Now their old house is slowly falling apart around Simon, but he doesn't have the money to fix it, especially after he loses his job. Simon receives a book from a stranger--a bookseller named Martin Churchwarry--who recognized his grandmother's name. It's the record book for an old traveling carnival, and as Simon studies it, he realizes that every women in his family has killed herself on July 24th-- the same day his mother did, and in the same way. Simon begins to grow anxious for the well-being of his sister, Enola, who also performs in a traveling carnival. Enola arrives in town for a visit with her boyfriend, Doyle, and seems to be keeping secrets, particularly about the tarot cards she's been reading. Simon realizes a curse has been placed on his family and struggles to unravel it before his sister succumbs to the same fate as their ancestors, especially as the 24th of July approaches.

The story intertwines with the past, in which Amos, mute boy abandoned and raised in the wild, joined up with a traveling carnival and became the apprentice to a tarot card reader, Madame Ryzhkova. There, Amos met Evangeline, a girl who could hold her breath for long periods underwater, and who was running from a dark past: her birth caused her mother to waste away and die, and she killed her grandmother to escape from her oppressive ways. Evangeline was initially wary of Amos, but through the use of tarot cards they learned to communicate with each other and fell in love. Madame Ryzhkova didn't trust Evangeline, however, recognizing her as a water spirit that would suck out men's souls. She tried to warn Amos away, but their love was too strong. Evangeline gave birth to a baby girl, Bess, which caused an entire town to flood, and slowly began to wither away herself. When Amos discovered the truth about what Evangeline had been running from, she drowned herself. Amos was so distraught that he left the baby with the carnival and vanished into the woods.The baby was raised to be a "mermaid" like her mother, and the cycle continued.

Believing the book is cursed, Simon burns it, but realizes that didn't work when the town begins to flood and his parents' house falls into the ocean. Simon learns that Enola inherited her tarot cards from their mother, who in turn inherited it from her ancestors all the way back to Evangeline and Amos, and realizes it is the cards that has carried this curse over the years. Simon takes the cards into the ocean to drown the curse--and nearly in the process himself--before he is saved by the girl next door he has been falling in love with, Alice. Alice, Enola, Doyle, and Simon take off to leave their messy past behind and start a new life.

More summaries and resources for teaching or studying The Book of Speculation.

The Book of Speculation from BookRags. (c)2022 BookRags, Inc. All rights reserved.