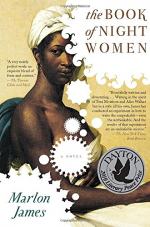 The Book of Night Women Summary & Study Guide includes comprehensive information and analysis to help you understand the book. This study guide contains the following sections:

This detailed literature summary also contains Quotes and a Free Quiz on The Book of Night Women by Marlon James .

The Book of Night Women is a historical novel that begins in 1785 in Jamaica. Lilith, a green-eyed mulatto girl is born into slavery. Her mother dies in childbirth and the overseer, Jack Wilkins, places Lilith with a slave named Circe and a mad slave named Tantalus, as all of the other women are afraid of her because of her eyes. Lilith believes that Circe and Tantalus are her parents until she is 14, when Circe tells her that she is not her mother. Around the same time, Lilith experiences an attempted rape. Rather than succumbing, Lilith kills the man who tries to rape her. When Circe comes home, she finds Lilith with the dead body.

Circe gets Homer, an even more powerful slave than Circe, to help with the situation. Homer brings two other women with her. They conceal the body and Homer takes Lilith with her to the main house. While Lilith is there, Homer teaches her to read and leads her to the meeting of the night women where Homer and five other women are plotting to take their freedom. At the first meeting, Lilith finds out that these women are her half- sisters and that their father is the overseer, Jack Wilkins, who placed her with Circe and Tantalus. Lilith thinks that she is better than all of them and does not want to join their group.

While Lilith is at the main house, the mistress starts planning a New Year's Eve ball. She chooses Lilith as one of the servers. The mistress is crazy, though, and during one of her mad periods, she stops planning for the ball. A young woman from a neighboring estate with eyes for the mistress’ son, Humphrey, comes and takes over the planning. She chooses her own staff and does not include Lilith. This makes Lilith mad and she goes to one of her half-sisters to work magic that will cause one of the slaves participating in the event to get sick. The slave dies. Lilith’s half-sister tells her it is because Lilith wished her dead. With one less slave, Lilith has to participate in the ball.

This pleases Lilith because she has a crush on Humphrey and she wants to get his attention by impressing hm. She is too sure of herself, though, and falls while carrying a tray of soup. The soup burns Isobel’s chaperone. Up until this time, Lilith has led a protected life and has never received a whipping. After the fall, however, her life changes. The slave drivers take Lilith and rape her while the party continues. After that, she gets weekly whippings. The whippings stop when her father, Jack Wilkins, comes and demands that they end.

Afterward, Humphrey sends Lilith to Isobel’s home, Coulibre. Isobel has noticed Lilith trying to get Humphrey’s attention and says that she plans to keep an eye on her. At Coulibre, Lilith sees the harsh treatment the slaves receive. Humphrey gives permission for Lilith’s whippings to start again. When the master and mistress kill the slave that performs most of the duties in the house, including giving sexual favors to the master, Lilith has to take her place. One day Lilith is giving the master of the house a bath and makes a remark that he does not like. They fight and she drowns him. The mistress falls over the balcony and dies, and Lilith sets the house on fire.

Another slave is blamed for the fire and friends of the family kill her and several other estate slaves. Lilith goes back to the estate she was born on. Isobel goes there as well as she now has nowhere to go. Not long after arriving, Lilith goes to live with Robert Quinn, the new overseer and Humphrey’s best friend. Quinn tries to create a real home for the two of them, but Lilith matured during her time at Coulibre and knows that it is impossible for them to truly live like that.

Meanwhile, the night women are still meeting and plotting. Lilith has never really joined them and Homer continues to try to recruit her. As the time to hold the rebellion nears, it becomes obvious that the estate Lilith lives on is the weakest link because Homer has not planned well. In reality, Homer’s true focus is to get her own personal revenge.

The rebellion finally happens, but fails. During the uprising, Robert Quinn loses his life. Lilith saves her father and because of that, he saves her when Humphrey orders the death of all of the other slaves.

Afterward, Humphrey goes back to England, leaving the estate in the hands of a lawyer. Isobel stays there because she is pregnant and the baby could be Humphrey’s. Humphrey does not know this though, because Isobel has slept with other men as well. Lilith lives with and takes care of her father until he dies. She also has a daughter, Lovey Quinn. Robert Quinn is Lovey’s father. Homer survives, but is blind and lives in the bush. All of the other night women perish.