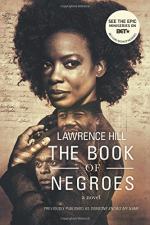 Plot Summary
+Chapters Summary and Analysis
Book One: And now I am old {London, 1802}; Small hands were good {Bayo, 1745}; Three revolutions of the moon; We glide over the unburied
Book Two: And my story waits like a restful beast {London, 1803}; They call me an 'African' {Sullivan's Island, 1757}; Words can swim farther than a man can walk {St. Helena's Island, 1757}; Milk for the longest nursing; The shape of Africa {Charles Town, 1762}; Words come late from a wet-nurse
Book Three: Nations not so blest as thee {London, 1804}; They come and go from holy ground {Manhattan, 1775}; Negroes and other property; Gone missing with my most recent exhalation {Birchtown, 1783}; My children were like phantom limbs; Elephants for want of towns
Book Four: Toubab with black face {Freetown, 1792}; Help from the saints; G is for Grant, and O for Oswald; God willing
Book Four: Grand djeli of the academy {London, 1802}
Free Quiz
Characters
Symbols and Symbolism
Settings
Themes and Motifs
Styles
Quotes
Order our The Book of Negroes Study Guide

Related Topics
Someone Knows My Name

Lawrence Hill
This Study Guide consists of approximately 64 pages of chapter summaries, quotes, character analysis, themes, and more - everything you need to sharpen your knowledge of The Book of Negroes.

The Book of Negroes Summary & Study Guide includes comprehensive information and analysis to help you understand the book. This study guide contains the following sections:

This detailed literature summary also contains Quotes and a Free Quiz on The Book of Negroes by Lawrence Hill.

The following edition of the novel was used to create this guide: Hill, Lawrence. Book of Negroes. HarperCollins, 2007.

Aminata Diallo, a woman from the village of Bayo in Africa, advocates for the abolition of the slave trade in London, England in 1802. To support the abolitionist cause, she writes her life story, so that people in England and around the world may know the truth about slavery. Aminata, also known as "Meena Dee," is born in 1745 in Bayo. Her father, Mamadu, teaches her how to read and pray in Arabic, while her mother, Sira, teaches her how to catch babies and care for pregnant women. Literacy and midwifery become Aminata's most prominent skills, and they help her to survive later in life.

At age 11, Aminata is kidnapped, and her parents are murdered. Made to march for three months, Aminata is eventually taken to an island on the west coast of Africa and put on a slave ship that sails to British North America. On the ship, she endures and witnesses disgusting conditions, brutally cruel treatment, and terrible loss. She gets to know a young man named Chekura, who helped keep her captive but who was betrayed by the people he worked for.

The ship arrives in South Carolina, where Aminata and her fellow villager Fomba are sold to Robinson Appleby, who owns an indigo plantation on St. Helena's Island. Aminata lives with a woman named Georgia and soon begins helping Georgia deliver babies while also working on the plantation. One of the plantation's overseers, Mamed, recognizes Aminata's intelligence and offers to teach her to read in secret; Mamed and Georgia show Aminata how to conceal her intelligence, for Appleby does not want independent thinkers on his plantation.

Aminata grows into a teenager and falls in love with Chekura. Chekura does his best to visit Aminata, but it is difficult, for it is dangerous for him to leave his owner's property. Appleby discovers his visits and, outraged by Aminata’s disobedience, forces her into his house and rapes her.

Aminata marries Chekura and becomes pregnant with his child. Their son, Mamadu, is born in 1761; shortly after, Appleby steals Mamadu and sells him, causing Aminata to fall into grief. Appleby later sells Aminata to a man named Solomon Lindo, an indigo inspector who takes Aminata to his home in Charles Town, South Carolina. Aminata begins working for Lindo and catches babies in Charles Town. She discovers that Lindo had arranged the sale of her son, and when Lindo must leave to conduct business in New York, she accompanies him with the mindset that she will never return to Charles Town.

In Manhattan, Aminata escapes Lindo with the help of tavern owner Sam Fraunces. She builds a shack in a community of free and escaped black people called Canvas Town. She begins working for Fraunces and teaches other black people how to read; she also catches babies and provides medicine.

The American Revolutionary War begins, and Aminata and her peers must choose who to trust: the British or the rebels. Aminata comes to know a British lieutenant named Malcolm Waters, who helps Aminata find favor with the British. After reneged offers and empty proclamations, the British arrange for several hundred black people to travel to Nova Scotia, where they will be given land and supplies. Aminata registers their names in a ledger called the Book of Negroes, and signs up herself, along with Chekura, who finally finds her again. Husband and wife soon conceive another child.

Before they travel to Nova Scotia, Aminata is called off the ship due to an unresolved claim on her person. She tells Chekura to travel without her. She goes to court and finds Robinson Appleby, who tries to take her back. With the help of Sam Fraunces, Solomon Lindo testifies that he is, in fact, Aminata's owner; he then grants her her freedom, allowing her to sail to Nova Scotia.

Things are hardly different in Nova Scotia, though. Black people are still segregated away from white people, and the British fail to deliver land, food, and supplies. Aminata settles in Birchtown, where she makes friends with the preacher Daddy Moses. There, she delivers a baby girl named May.

Aminata tries to find Chekura. She puts ads in the newspapers and travels to the town where Chekura's ship was supposed to dock. She finds nothing; meanwhile, tensions between black people and white people escalate into riots. In the midst of the riots, Aminata loses May, who is taken by her employer Mr. and Mrs. Witherspoon. Aminata tries but is unable to find May.

Another British lieutenant, John Clarkson, arrives in Birchtown, offering Aminata and her peers the chance to sail to Sierra Leone in Africa, where they will receive land of their own. Although she is reluctant to abandon her search for May, Aminata receives news that Chekura's ship, the Joseph, had sunk. She believes she will never see her daughter again, and with that, she agrees to return to Africa.

Upon arriving in Sierra Leone, Aminata's first priority is finding and returning to her village, Bayo. She is placed in a colony called Freetown, which is anything but free. She and her peers are encouraged not to venture outside the town, for fear of slave traders and kidnappers.

After several years and much negotiation, Aminata finally arranges a journey inland toward Bayo. She never makes it, though: the man leading the trip, Alassane, plots to sell her. Aminata escapes Alassane and his men, and goes back to Freetown, and from there to London, England, where she testifies to the parliamentary committee on the abolition of slavery.

After her testimony, the abolitionist movement gains strength. Aminata meets the royal family, then sees a young woman who has been waiting years to see her. It is May, her 18-year-old daughter. Finally reunited, mother and daughter embrace, never to let each other go again.

With her story told and set to be published, and with May pregnant and engaged to be married, Aminata finally relaxes. She has become a djeli, a storyteller, spreading wisdom and truth throughout London and the world, but her wisdom has come at an almost impossible cost.

More summaries and resources for teaching or studying The Book of Negroes.

The Book of Negroes from BookRags. (c)2022 BookRags, Inc. All rights reserved.