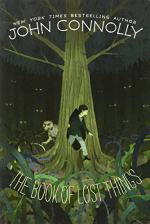 John Connolly
This Study Guide consists of approximately 53 pages of chapter summaries, quotes, character analysis, themes, and more - everything you need to sharpen your knowledge of The Book of Lost Things.

The Book of Lost Things Summary & Study Guide includes comprehensive information and analysis to help you understand the book. This study guide contains the following sections:

This detailed literature summary also contains Quotes and a Free Quiz on The Book of Lost Things by John Connolly.

David is a youngster when his mother falls ill. He develops elaborate routines in the hope that he can save her but she has to go into a hospital for the terminally ill. David and his father spend long hours traveling to visit his mother and he feels a sense of something akin to relief when his mother dies. He immediately feels guilty for that feeling.

David and his father live in London and war has prompted most families to send their children to the country where they can be safer. David and his father remain in London only a short time after his mother's death before David's father marries a woman named Rose. She was a nurse at the hospital where his mother died and David resents Rose's presence from the beginning. They move to Rose's house in the country. Rose and David's father soon have a son. David's half-brother, Georgie, takes up a lot of time and attention. David resents Georgie and this resentment grows to a level that David can think of little else.

David hears books talking to him and discovers that one of the books belonged to Rose's uncle, Jonathan, who disappeared when he was a child. A young girl named Anna, adopted into the family, disappeared with Jonathan. David is curious about their fate. David then hears his mother's voice calling to him from the garden behind Rose's house. David enters a crack in the garden wall and steps out of a hollow tree into a magical land that David calls Elsewhere.

He believes his mother is trapped there and he wants to find her. He leaves the tree behind and the Woodsman soon finds him. The Woodsman tells David that the king of the land has a magical book, “The Book of Lost Things,” and that the answers to David's questions might be found in that book. However, they are threatened by Loups, creatures that are half wolf, half man. David and the Woodsman are trapped at a bridge guarded by trolls, and David has to destroy the bridge, leaving the Woodsman on the other side. The Woodsman doesn't die, though David believes he must have.

David continues his trek and encounters magical beings, including a woman with magical salve who switches the heads of children and animals using the salve to connect the heads to their new bodies. David manages to escape only to find himself facing other dangers. He meets Snow White and the Seven Dwarfs and discovers that they are not as he'd always imagined. He eventually meets a knight named Roland who helps David learn to defend himself.

Through it all, the Crooked Man follows David, helping David make it to the castle. There, David discovers that the king, now near death, is Jonathan, and that the Crooked Man feeds on the anger of children who are jealous of their younger siblings and friends. The Crooked Man promises that David and Georgie can rule this kingdom together but David sees the Crooked Man for the trickster he is. He helps destroy the Crooked Man just as the Woodsman arrives and helps David accept that his mother is truly dead. The Woodsman then helps David return home but says David may choose to return to this land someday.

David wakes in a hospital bed with Rose at his side. He discovers that he has a new understanding for his stepmother's struggle to be part of his life and a new affection for Georgie. He lives his life with happiness, but knows that the Crooked Man was right when he said that pain is a normal part of life. Georgie dies in another war. David's father dies of a heart attack. David marries but his wife and son die as well. David winds up taking care of Rose in her old age. David lives to be an old man and a well-known writer. Just before his death, he returns to the garden wall and slips through to Elsewhere.

More summaries and resources for teaching or studying The Book of Lost Things.

The Book of Lost Things from BookRags. (c)2022 BookRags, Inc. All rights reserved.