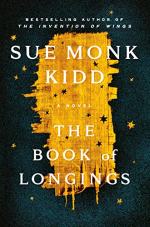 Related Topics
The Dance of the Dissident Daughter: A Woman's Journey from Christian Tradition to the Sacred Feminine
The Secret Life of Bees
The Invention of Wings

Sue Monk Kidd
This Study Guide consists of approximately 42 pages of chapter summaries, quotes, character analysis, themes, and more - everything you need to sharpen your knowledge of The Book of Longings.

The Book of Longings Summary & Study Guide includes comprehensive information and analysis to help you understand the book. This study guide contains the following sections:

This detailed literature summary also contains Quotes and a Free Quiz on The Book of Longings by Sue Monk Kidd.

The following version of this book was used to create the guide: Monk Kidd, Sue. The Book of Longings. Random House, 2020.

Sue Monk Kidd's The Book of Longings is told from Ana's first person point of view and divided into five overarching sections. Each section is divided into smaller untitled chapters. The novel is told in the past tense.

In "Sepphoris 16 - 17 CE," 14-year-old Ana begins devoting herself to a life of reading and writing. After discovering that she had never been taught the women's stories in the Scriptures, she decided to become the chronicler of forgotten stories. She hides these writings from her mother, Hadar, fearing her wrath. Her work, however, is intercepted as soon as her parents arrange her betrothal to an undesirable widower, Nathaniel ben Hananiah. Desperate to escape the marriage, Ana prays tirelessly for God to release her. Her aunt, Yaltha, however, suggests that she turn to herself for truth and understanding instead. She gives her an incantation bowl, and tells her to write her prayers inside. In the bowl, Ana records her hopes to become a powerful voice, and to be seen and remembered for generations to come.

Though Ana attempts to make peace with her fate, she cannot stop thinking about the young mysterious man, Jesus, she saw in the marketplace. One day, while searching for a place to hide her scrolls, she encounters him in the hills. The two begin meeting here and talking in secret. Ana is filled with longing, believing she has fallen in love with him. Jesus not only has an unconventional approach to the faith, but seems to see and understand her like no one else has.

Not long after Ana's betrothal ceremony, Nathaniel falls ill with fever and dies. Though widowhood is meant to be a horrible fate, Ana secretly rejoices. She is even happier when she learns that Jesus wants to marry her. Her parents bless the marriage, and the new couple, along with Yaltha, move to Nazareth.

In "Nazareth 17 - 27 CE," Ana struggles to grow accustomed to life outside Sepphoris. Jesus's family is much poorer than she imagined. Not only must she help the family with chores, but Ana has little time and no materials to maintain her writing practice. She falls into a new form of loneliness when Jesus begins spending more and more time outside the village. At first, his travels are defined by the jobs he can secure elsewhere. As his beliefs become increasingly radical, however, his involvement in the Zealot movement also starts keeping him away from Nazareth. Eventually, he joins the Messiah Priest, John the Immerser's followers, insisting that Ana stay behind. While he is gone, Ana delivers her baby prematurely. The baby dies, and Ana must look to her aunt for comfort. With Yaltha's help, she returns to writing and finds healing.

Not long thereafter, Ana gets involved in trying to protect a former friend. This involvement leads to her imminent arrest.

In "Alexandria: Lake Mareotis, Egypt 28 - 30 CE," to escape her capture, Ana and Yaltha flee to Alexandria, where they shelter with Yaltha's unkind brother, Haran. Haran lets them stay under the conditions that Ana works as his scribe, they pay him rent, and they promise not to search for Yaltha's estranged daughter, Chaya. One week, however, while Haran is away, Ana and Yaltha discover Haran sold Chaya into slavery after changing her name to Diodora. They sneak out of the house and meet Diodora, revealing the truth of her past. Though she does not respond favorably at first, she later returns to Haran's and reconnects with Yaltha. Haran returns and discovers the women's betrayal, threatening to ruin Ana and Yaltha. In the middle of the night, they flee to the Therapeutae.

The community's leader, Skepsis, agrees to let them stay. Months pass without any word from the outside world. Growing anxious about Jesus, Ana sends her servant into the city. He tells Ana he heard Jesus had declared himself the Messiah, King of the Jews. Fearing for his life, Ana heads to Jerusalem.

In "Jerusalem: Bethan 30 CE," Ana arrives at Jesus's friends, Mary, Martha, and Lazarus's home. While there, she learns the truth of Jesus's political and spiritual teachings. She also hears that Judas plans to betray Jesus if it means keeping the movement alive. Terrified for Jesus, she leaves the next day for the Garden of Gethsemane where she heard Jesus was praying. In the garden, she finds Judas weeping. He begs Ana to forgive him for turning Jesus over to the Roman soldiers. Furious and scared, Ana rushes to Pilate's court. On her way, she encounters a crowd along the path to Golgotha. She is horrified to see Jesus, bloodied and wounded, dragging a cross up to the hilltop. Against the guard’s warnings, she rushes to her husband and promises never to leave him. The guards force her away and Ana is joined by a band of friends. The women stay close as they watch Jesus's brutal death.

That night, Ana wears Jesus's cloak to comfort herself. So distraught, she decides she must return to the Therapeutea to be with her aunt.

In "Lake Mareotis, Egypt 30 - 60 CE," Ana returns to the Therapeutea and reunites with Yaltha. Diodora has also joined the community, and the women comfort Ana in her sorrow and despair. As the years pass, Ana returns to her writing, penning countless scrolls, which she binds into books. Though she always misses Jesus, she feels free and content living her new with the Therapeutea.

More summaries and resources for teaching or studying The Book of Longings.

The Book of Longings from BookRags. (c)2022 BookRags, Inc. All rights reserved.