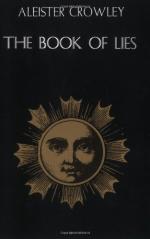 The Book of Lies, Which Is Also Falsely Called Breaks: The Wanderings of Falsifications of the One Thought of Frat Summary & Study Guide

Aleister Crowley
This Study Guide consists of approximately 37 pages of chapter summaries, quotes, character analysis, themes, and more - everything you need to sharpen your knowledge of The Book of Lies, Which Is Also Falsely Called Breaks.

The Book of Lies, Which Is Also Falsely Called Breaks: The Wanderings of Falsifications of the One Thought of Frat Summary & Study Guide Description

The Book of Lies, Which Is Also Falsely Called Breaks: The Wanderings of Falsifications of the One Thought of Frat Summary & Study Guide includes comprehensive information and analysis to help you understand the book. This study guide contains the following sections:

This detailed literature summary also contains Topics for Discussion and a Free Quiz on The Book of Lies, Which Is Also Falsely Called Breaks: The Wanderings of Falsifications of the One Thought of Frat by Aleister Crowley.

"The Book of Lies" presents a more or less comprehensive explanation of Crowley's view of the universe and how followers of his religion, Thelema, should act in it. However, it is not purely a religious guide as Crowley interjects many of his personal struggles into the text, primarily his love for a woman named Laylah. The plot, such as it is, is very non-linear as the subject of most chapters is determined by the importance of the chapter's number in the Cabala.

Crowley begins the book by laying out how he believes the universe came into existence; his belief is mostly derived from the Cabalistic system but is also deeply influenced by Eastern religions such as Hinduism and Buddhism. In this cosmogony, nothing becomes many, which then become two—the male and female forces of the universe. The two are united by love and become one and return to nothing before the cycle starts over again.

Very quickly, Crowley moves from the structure of the universe to advice to his followers with some major themes repeated throughout the book. The most important rule in Crowley's system and one introduced very early is "do what thou wilt." Furthermore, Crowley writes that thought is a disease, and he seeks to destroy it with numerous contradictions throughout the book. Furthermore, because thought is a disease, language always fails to communicate its message completely and often just serves to confuse. Anything important is usually to be done in silence and practiced so frequently that it can be done unconsciously. Crowley also urges his followers to celebrate death as it is simply the reverse of life and the origin of new life. Life is primarily to be valued as a struggle such as war, making death all the more necessary. Crowley also praises sex repeatedly because he believes that only during the orgasm can man kill his mind and destroy thought. Finally, Crowley frequently warns his followers of the dangers of material attachments.

About a third of the way through the book, Crowley introduces his love interest Laylah, and as the book advances, she becomes a more frequent subject of Crowley's chapters. For most of this time, Crowley is separated from Laylah. This separation causes Crowley to lose sight of his spiritual goals and indulge in material pleasures. After reuniting with Laylah, Crowley realizes that the many and nothing are the exact same, so it is permissible to enjoy the world. Crowley concludes that the only important thing in the universe is the love of Laylah and the other great feminine forces.

More summaries and resources for teaching or studying The Book of Lies, Which Is Also Falsely Called Breaks: The Wanderings of Falsifications of the One Thought of Frat.

The Book of Lies, Which Is Also Falsely Called Breaks: The Wanderings of Falsifications of the One Thought of Frat from BookRags. (c)2022 BookRags, Inc. All rights reserved.