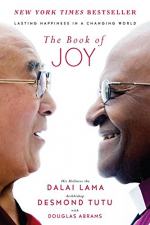 Summary
+Chapters Summary and Analysis
Arrival: We Are Fragile Creatures
Why Are You Not Morose?
Nothing Beautiful Comes Without Some Suffering
Have You Renounced Pleasure?
Our Greatest Joy
Lunch: The Meeting of Two Mischievous People is Wonderful
You Are a Masterpiece in the Making
Fear, Stress, and Anxiety: I Would Be Very Nervous
Frustration and Anger: I Would Shout
Sadness and Grief: The Hard Times Knit Us More Closely Together
Despair: The World Is in Such Turmoil
Loneliness: No Need for Introduction
Envy: That Guy Goes Past Yet Again in His Mercedes-Benz
Suffering and Adversity: Passing through Difficulties
Illness and Fear of Death: I Prefer to Go to Hell
Meditation: Now I'll Tell You a Secret Thing
Perspective: There Are Many Different Angles
Humility: I Tried to Look Humble and Modest
Humor: Laughing, Joking Is Much Better
Acceptance: The Only Place Where Change Can Begin
Forgiveness: Freeing Ourselves from the Past
Gratitude: I Am Fortunate to Be Alive
Compassion: Something We Want to Become
Generosity: We Are Filled with Joy
Celebration: Dancing in the Streets of Tibet
Departure: A Final Goodbye
Important People
Objects/Places
Themes
Styles
Quotes
Topics for Discussion
Order our The Book of Joy Study Guide

Related Topics
Dalai Lama
The Universe in a Single Atom: The Convergence of Science and Spirituality

Dalai Lama
This Study Guide consists of approximately 79 pages of chapter summaries, quotes, character analysis, themes, and more - everything you need to sharpen your knowledge of The Book of Joy.

The Book of Joy Summary & Study Guide includes comprehensive information and analysis to help you understand the book. This study guide contains the following sections:

This detailed literature summary also contains Topics for Discussion on The Book of Joy by Dalai Lama.

This three-part documentation of a week-long meeting between two of the world's most renowned spiritual leaders is crafted by author and activist Douglas Abrams. The topic of the week was joy. More specifically, the men attempted to create a road-map for ordinary people to cultivating a lasting sense of joy in their life, regardless of their suffering. Abrams divides the book into three sections; the first is dedicated to the nature of joy, where the men create a vague definition of joy as a lasting state, not just a fleeting emotion. The second section of the book addresses the most pressing obstacles humans face to joy. The third and final section of the text defines eight pillars to joy that the men have agreed upon throughout the weeks' worth of discussion. These pillars to joy are ultimately the discussion's conclusion: actively practicing the eight pillars to joy are the Dalai Lama and Archbishop Tutu's secret to attaining true, lasting joy.

The mission of the visit was not only to discuss joy, but to celebrate the Dalai Lamas's eightieth birthday. Thus, it is fitting that Abrams states in his introduction that the book is a three-layer birthday cake. The first layer comprising of specific teachings from the Dalai Lama and Archbishop Tutu, the second layer representing scientific findings on the nature of joy, and the third and final layer dedicated to a documentation of the personal, intimate reunion between the two old friends. Abrams incorporates all three of these layers to each of his chapters by including the words of the men themselves, scientific references, and his own human observations. Abrams incorporates these three sources of information seamlessly to fully incorporate the reader into the meeting room of the Dalai Lama's residence in Dharamsala, and ultimately into the conversation. While some may categorize this as a self-help book, it reads as more of a casual conversation. Abrams often digresses from the conversation to incorporate his own doubts, opinions, and observations, as well as the input from professionals and scientific experts, to make the conversation more fluent.

Abrams brings the discussion to a close by creating a convergence of the most important aspects to living a joyful life, as taught by the Dalai Lama and Archbishop Tutu throughout the week. They decide on eight pillars, four of the mind and four of the heart, that are essential to cultivating a joyful life. The pillars of the mind, perspective, humility, humor, and acceptance, and the pillars of the heart, forgiveness, gratitude, compassion, and generosity, are not offered as a foolproof system to attaining joy. Rather, each pillar represents a trait that one can actively practice throughout the duration of his or her life. The Dalai Lama and Archbishop Tutu reiterate several times that joy cannot be cultivated overnight. Also, joy will never come to those who actively seek it; Tutu warns that "we cannot pursue joy as an end in itself, or we will miss the bus" (303). This is the reason behind the eight pillars to joy - they are essentially a road map for living a meaningful and purposeful life. A life defined by a true sense of lasting joy is the byproduct of actively practicing the eight pillars to joy.

More summaries and resources for teaching or studying The Book of Joy.

The Book of Joy from BookRags. (c)2022 BookRags, Inc. All rights reserved.