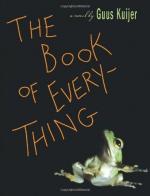 The Book of Everything Summary & Study Guide

Guus Kuijer
This Study Guide consists of approximately 25 pages of chapter summaries, quotes, character analysis, themes, and more - everything you need to sharpen your knowledge of The Book of Everything.

The Book of Everything Summary & Study Guide Description

The Book of Everything Summary & Study Guide includes comprehensive information and analysis to help you understand the book. This study guide contains the following sections:

This detailed literature summary also contains Topics for Discussion on The Book of Everything by Guus Kuijer.

The Book of Everything by Guus Kuijer is a young adult novel that revolves around the life of nine-year-old Thomas Klopper, who is living in Amsterdam Netherlands after World War II. Thomas lives with his angry, religious father; his beloved mother, who is beaten often by her husband; and his sister, Margot.

Thomas is blessed with the ability to "see" things that no one else can see. He is visited often by Jesus, who speaks to Thomas about his life. He sees hailstorms and he witnesses some of the five plagues mentioned in the Bible's Old Testament, portions of which Father reads aloud to the family each night. At the same time, Thomas repeats to himself that "God does not exist" when he is punished by his father, who strikes him repeatedly with a wooden spoon on his bare bottom. At home, Thomas witnesses frequent angry outbursts and domestic violence on a regular basis.

Thomas' only hope for a change in his family circumstances comes from an unlikely source: Mrs. van Amersfoort, the next-door neighbor believed by neighborhood children to be a witch. The eccentric old woman invites Thomas into her home one day, and he learns that her late husband was executed by the Nazis during World War II. She is kind to Thomas, and seems to know about the violence in his home. She lends him books to read, asks him to read poetry aloud to her, and tells him not to be frightened. She later writes a note to Thomas' father, warning him that she knows what goes on in the Klopper home.

With the help of Mrs. van Amersfoort, the family holds a read-aloud club meeting at the Klopper home - a decision that has Thomas worried because they never have guests in their home. Father has no idea that the meeting will be held, but Thomas, Margot, and Mother all know about it in advance. A group of women arrive for the meeting, including Mrs. van Amersfoort, and they applaud Thomas when he reads poetry out loud to them. The women also bring Mrs. Van Amersfoort's gramophone with them, and play classical and jazz music by Louis Armstrong.

When Father calls the music "heathenish" and complains that the poetry sounds like "empty vessels," he is chastised by one of the women in the group. Father angrily retreats to his study, outnumbered by a group of women who are clearly there to support and love Thomas, Mother, and Margot. The bond that was secretly formed will continue to protect the family from further harm.

Jesus appears to Thomas that night and tells him that he cannot help Thomas' father. Thomas realizes at that point that some people can't be redeemed because of their anger and unhappiness. But it's clear that because of their friends, the family circumstances will now change for the better.

More summaries and resources for teaching or studying The Book of Everything.

The Book of Everything from BookRags. (c)2022 BookRags, Inc. All rights reserved.