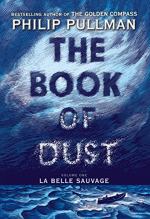 The Book of Dust Summary & Study Guide includes comprehensive information and analysis to help you understand the book. This study guide contains the following sections:

This detailed literature summary also contains Quotes and a Free Quiz on The Book of Dust by Philip Pullman.

The following version of this book was used to create the guide: Pullman, Philip. The Book of Dust Volume One: La Belle Sauvage. Penguin Random House, 2017.

Pullman's novel is divided into 25 chapters, tracing a two-month journey from Oxford to London. Malcolm Polstead, an 11-year-old boy living and working at his parents' inn in Oxford is the third person narrator. In the world of the novel, each person has a daemon who contains part of their soul and accompanies them throughout their life and takes the form of an animal. Whenever they are separated by more than a few feet, both feel an almost unbearable pain. Malcolm's daemon is called Asta and takes on various forms.

Pullman begins the novel in a small inn called the Trout just outside of Oxford in the village of Gostow. Malcolm helps out at the Trout after school, since his parents own it. He does not get along with Alice, a 16-year-old girl who works there washing the dishes. Malcolm also frequently helps out at the priory across the river, the priory at Godstow, lending the sisters the use of his canoe La Belle Sauvage.

One night, while Malcolm is helping at the Trout, three strange men stay in the Terrace Room, the smallest dining room in the inn. They quiz Malcolm about the nuns at the priory, and Malcolm's father tells him that one of the men is Lord Nugent, the former chancellor of England. They ask if the nuns have ever taken care of a baby. The next day, Malcolm goes birdwatching and spots a mysterious man drop something. Malcolm and Asta retrieve it, but before they can return it, the man is accosted by two other men and taken away by the CCD or Consistorial Court of Discipline. It is a small acorn, carved from wood with a hidden message inside referencing an alethiometer. The next night the two CCD men stay at the inn and question Malcolm. The two CCD men are confronted by another patron George Boatwright who then leaves before they can arrest him.

The next day Malcolm realizes that the man who dropped the acorn was Robert Luckhurst, a scholar at Oxford, who fell into the canal. He also finds out that the nuns are now caring for a baby named Lyra, the six-month-old love child of an explorer named Lord Asriel and a frosty woman named Mrs. Coulter. Malcolm visits the priory and asks to see Lyra; he is immediately enamored with her.

Meanwhile in Sweden, a gyptian named Coram van Texel meets with two men Gunnar and Axel to discuss the political situation in Brytain as well as the alethiometers. Five are being studied, but one is missing. Gunnar was approached by Mrs. Coulter to use the alethiometer to try to find Lyra. Later, Coram fights a man with a hyena daemon and loses but wounds the hyena's front leg. He sends a letter to Lord Nugent about what he learned.

Meanwhile at Oxford University, Dr. Hannah Relf is busy working on behalf of an organization called Oakley Street to try to interpret the alethiometer there. Oakley Street is working against the ruling theocracy that takes over, called the Magisterium, whose agents include the CCD. She wonders where the acorn is that she was supposed to get a week ago. Using the alethiometer, Hannah realizes that the acorn must be at the Trout inn with a boy. She meets Malcolm, who gives her the acorn and the paper and Hannah recruits Malcolm as a spy at the inn, to pass along messages to her via borrowed books from her library.

Later at school, Malcolm learns from his friend Eric that Robert Luckhurst's death was strangled to death. At the priory, Mr. Taphouse fashions new shutters for the windows, for added protection. Malcolm reports to Hannah and afterwards she meets with George Papadimitriou, one of the men who accompanied Lord Nungent at the inn. Hannah communicates further with Oakley Street about what she learned.

Malcolm helps Mr. Taphouse again and sees baby Lyra, who is frightened by a strange lady who is visiting. Back at his school, the same strange lady, Miss Carmichael, appears and starts up the League of St. Alexander, which rewards its members for reporting on their friends, teachers, and parents. Many people are aghast at this and when Malcolm reports to Hannah the next day, she tells him that the mastermind behind the League is Mrs. Coulter, Lyra's mother.

Back at the priory, Malcolm helps Mr. Taphouse with the new shutters when three men arrived and want to take Lyra away. Sister Benedicta sends them packing. At the Trout Inn, Malcolm serves Lord Asriel and the two talk. Malcolm takes Lord Asriel to see his daughter and he spends a few precious minutes with her before men start to catch up with him. Asriel escapes in Malcolm's canoe.

A few days later the Office of Environmental Protection warns Hannah about an upcoming storm. Meanwhile at the priory, after talking with the sisters, Malcolm sees a new daemon, a hyena, lurking. The hyena then urinates on the path as Malcolm walks home and afraid, he runs and tells the sisters. After calming down he heads to the Trout only to see a man with the three-legged hyena daemon at the bar. He tells Hannah and they talk about interpreting the alethiometer. That evening, someone brings La Belle Sauvage back.

Malcolm meets Coram at the inn and reveals that he was the one who returned Malcolm's boat after it underwent repairs. Coram warns Malcolm that the coming flood will be catastrophic and about Gerard Bonneville - the man with the maimed hyena daemon. The next morning, Alice tells Malcolm that Gerard Bonneville asked her many questions about the baby. After dinner, Malcolm and Asta watch the priory and notice Gerard trying to enter a window and see him beats his own hyena daemon.

Malcolm reports to Hannah and she tells him that Gerard just got out of prison. Later Hannah goes to dinner where she meets other members of Oakley Street and they ask her to give up her research to study the newly obtained Bologna alethiometer full time. They also tell her that Gerard used to be a scientist working on the Rusakov field and Dust before he went to jail.

The League is taking over Malcolm's school with many firings occurring. Malcolm visits Hannah, who has a visitor already - Mrs. Coulter who fishes for information about Lyra. The next day, Malcolm tells Alice about Mrs. Coulter. Alice tells him that the shutter that Gerard tried to get through was left open on purpose for him by Sister Katarina and Malcolm sees first-hand their relationship later that night. As he tries to process the information, the river floods and Malcolm, Alice, and Lyra narrowly escape from the water and Gerard Bonneville in Malcolm's canoe.

As the trio navigates the flood, Malcolm decides to set a course for Lord Asriel's house in London, since he has his address on a card. At Oxford, another agent of Oakley Street, Bud Schlesinger arrives and tells Oakley Street about a prophecy regarding a child that is destined to end destiny which is why the CCD and Mrs. Coulter are so interested in Lyra. During this, Hannah realizes that Malcolm is most likely heading towards Lord Asriel and they all set off to try to find him.

Meanwhile Gerard Bonneville continues to follow the trio. As they make another escape from him, Malcolm grabs Gerard's bag and stabs him with a knife. Gerard's gun goes off, blowing the last front leg off his hyena daemon. The trio then runs into George Boatwright who gives them shelter but they are sold out by a young boy named Andrew, a member of the League of St. Alexander. Men arrive and take Lyra. Malcolm learns that the men are actually from the Sisters of Holy Obedience sisters not the CCD. Malcolm sneaks into their priory and rescues Lyra before escaping with Alice and the canoe.

Alice, Malcolm, and Lyra end up on an enchanted island where a fairy named Diania tries to steal Lyra but Malcolm outsmarts her with a riddle. Malcolm and Alice go through Gerard's bag and find the missing sixth alethiometer. Both the CCD and Oakley Street are still looking for the trio. They end up crashing the canoe over a waterfall into a garden full of people who are dead or forgotten. As they do some repairs on the boat they that Gerard Bonneville is moving towards them. The trio tries to get away but find their path blocked by old iron doors. Luckily, Malcolm negotiates with the giant in charge of the gates and they are able to get through. They spend the night at a new island, which is cloaked in invisibility by a witch named Tilda who disappears as quickly as she appeared.

Still trying to get to London, the trio continues their journey, but a mysterious shadow seems to be following them. A CCD boat catches up to them and they hide in a graveyard until Gerard Bonneville attacks them again and Malcolm kills him with a paddle. They head to a pharmacy to get medicine for Lyra's cold.

A storm starts up just as the CCD catch up to La Belle Sauvage. Lord Asirel appears and grabs everyone but not before Malcolm is shot in the left arm. Later, Malcolm wakes up and Lord Asriel takes them back to Oxford. He places Lyra under scholastic sanctuary in Oxford. Malcolm places the alethiometer in Lyra's blankets just as she is taken in.

The Book of Dust from BookRags. (c)2022 BookRags, Inc. All rights reserved.