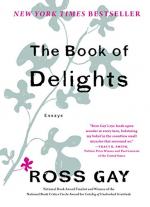 The Book of Delights Summary & Study Guide includes comprehensive information and analysis to help you understand the book. This study guide contains the following sections:

This detailed literature summary also contains Topics for Discussion on The Book of Delights by Ross Gay.

The following version of the book was used to create this study guide: Gay, Ross. The Book of Delights: Essays. Chapel Hill, NC: Algonquin Books of Chapel Hill, 2019.

In Chapters 1-17, Ross is first delighted by the miracle of being born, inefficiencies, his friends, flowers that grow in unexpected places and blowing things off. He then writes about the exploitation of black bodies and his friend Walt's leukemia diagnosis. He meditates on the movements of a praying mantis before writing about solidarity among black people in America. He has chance encounters with strangers, contemplates the virtues of writing by hand, and transports fig cuttings on an airplane. Ross delights in nicknames, onomatopoeic phrases, the concept of joy, and the popularity (or alleged lack thereof) of poetry. The final chapters in this section are about the delights of hummingbirds and waking up to realize a nightmare was just a dream.

In Chapters 18-34, Ross writes about deer, plants, gestures of solidarity, and his disdain for saucers. He delights in flowers, in witnessing a shared burden, and in moments of self-forgiveness. Ross bonds with a bellhop, travels, and reflects on both his childhood and his parents' interracial marriage. He gleans pecans from a tree and contemplates the delight of the "do-over" (90). Ross writes about his favorite scarf, his mother's memories of his now-deceased father, sexist language usage, and pop musicians DeBarge and Lisa Loeb.

Chapters 35-51 begin with the following delights: favorite songs, apples, small gestures of love, terms of endearment, and roller-skates. Ross reunites a lost child with his mother, finds a bird nest among debris in his garden, and observes certain that Republicans always look like they are frowning. Ross then delights in lying in bed in the sunshine, sharing something beautiful with another person. He then notes the closure of a pawn shop run by a racist proprietor. In the next essay, Ross is mistaken for someone who reads palms instead of who reads poems. He concludes with the delights of feeding birds, kombucha, nut groves, and his newfound ability not to surrender completely to what annoys him.

In Chapters 52-68, Ross criticizes the band Toto and re-interprets a sign outside a church. He delights in sidewalk naps, a toddler on an airplane, sunshine, gesticulations, Botan Rice Candies, trees, and forest ecosystems. Ross has a brief interaction with a stranger, delights in the color purple, and imagines a crossing guard as a shepherd through the afterlife. Ross loves poetry readings and sharing delights with others. He gets an email from a high school-aged reader, licks drips of coffee off the sides of his cups, and relishes the silliness of bobblehead toys.

In Chapters 69-85, Ross delights in makeshift projects, critiques hyper-photography, and contemplates the tendency to adorn statues with flowers. He is delighted when he can pee after holding it in, is waved at by strangers, and hears regional colloquialisms. He delights in removing bindweed from his garden, childhood memories, hugging friends, bees, a tomato seedling, mulberries, and his friend's faith in common decency. Ross' book of delights, written by a black person, is an inherent subversion of the cultural tendency to equate blackness with suffering. The final delights in this section are fireflies and the scythe he uses in his garden.

In Chapters 86-102, Ross delights in pawpaw plants, loitering, witnessing others being moved, and when the serious is revealed to be silly. Ross collects his urine to feed his plants, harvests carrots from the garden, watches the movie Moonlight, and contemplates his friend's misuse of air quotes. He writes about his mother's ability to laugh at herself, basketball, carports, childhood nostalgia and the writing of Jamaica Kincaid which is good but not always delightful. He concludes the books with the delights of bumblebees, honeysuckles, being grown, being kind to one's self and body before writing about his forty-third birthday and the end of this year-long project.