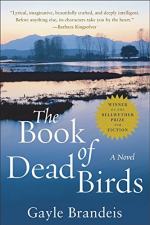 Gayle Brandeis
This Study Guide consists of approximately 67 pages of chapter summaries, quotes, character analysis, themes, and more - everything you need to sharpen your knowledge of The Book of Dead Birds.

The Title, The Book of Dead Birds

The use of the word “bird” in the title of the novel is symbolic of women as women are sometimes called “birds.” Someone can be dead because they are literally dead or because they are physically alive, but do not live. Thus the title symbolizes the women in the book who are dead either physically or figuratively because they exist, but do not live. Ava and Hye-yang are examples of the latter when the narrative begins. Sun is an example of the former. As the narrative contains the stories of both Ava and Hye-yang, it is the book of dead birds.

Sun's name symbolizes the brightness of the sun and the warmth and energy that it brings. It also symbolizes something high in the sky. Hye-yang follows Sun, or the sun, in her hopes to better her station...

More summaries and resources for teaching or studying The Book of Dead Birds.

The Book of Dead Birds from BookRags. (c)2022 BookRags, Inc. All rights reserved.