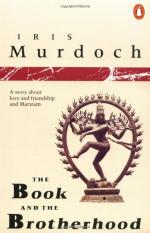 The Book and the Brotherhood Summary & Study Guide

The Book and the Brotherhood Summary & Study Guide Description

The Book and the Brotherhood Summary & Study Guide includes comprehensive information and analysis to help you understand the book. This study guide contains the following sections:

This detailed literature summary also contains Topics for Discussion and a Free Quiz on The Book and the Brotherhood by Iris Murdoch.

The Book and the Brotherhood is an intricate novel about a group of middle- aged Oxford graduates. Almost three decades earlier, they form a group known as the Brotherhood. Its sole objective is the financial support of a fellow graduate, David Crimond, so that he can continue his work writing a book about his Marxist political philosophy. Now, a reunion takes place at Oxford, which the elusive and solitary Crimond also attends. Many years previously, Crimond seduced Jean Cambus, the wife of a fellow graduate, and the affair drastically changed the dynamics of the relationships within the Brotherhood. He has come to the midsummer ball for the express purpose of seducing Jean for the second time, and he succeeds in his quest. Jean leaves Duncan, setting into motion a number of unsettling events that culminate in the death of one of the Brotherhood

Two members of the Brotherhood, Gerard Hernshaw and Jenkin Riderhood, are concerned about the renewed affair and meet to discuss possible ways to reconcile Jean and Duncan. They decide to send a young naive Oxford student, Tamar Hernshaw, to Jean to try to salvage the marriage. Tamar does not succeed, and Jean remains with the acerbic and brilliant Crimond. No persuasive argument can deter her from the firm conviction that Crimond is the only man she can love totally and completely. Jean's refusal to reconcile leads to a short affair between her estranged husband Duncan and the youthful Tamar, who conceives a child by him. The pregnancy is quickly ended through an abortion, but the act of killing her unborn child leaves Tamar in a terrible state of emotional confusion. An Anglican priest, Father McAlister, sees her suffering when she attends a church service with her middle-aged friend Rose Curtland, a member of the Brotherhood. Tamar resolves her life crisis through a conversion to Christianity.

At the same time, the Brotherhood must grapple with the fact that Crimond has not produced a book. Several meetings with the brilliant Marxist end in misunderstanding and renewed suspicion about his motives in conducting a second affair with Jean Cambus. Duncan hates Crimond and thinks about various ways to kill him, but he does not have the courage to take revenge. However, when Crimond finishes his masterpiece, he is determined to die in a suicide pact with Jean. When the plan to kill both him and his mistress goes completely awry, he instantly breaks off the relationship and turns to Rose Curtland. He asks Rose to marry him, but she refuses to consider such betrayal of the friendship she has with Jean. Although the estranged couple has reconciled, the affair continues to haunt both them and Crimond.

Crimond attempts to solve the problem by proposing a game of Russian roulette to Duncan. He actually hopes to die, but when a bullet is finally fired, their gentle friend, Jenkin Riderhood, is killed. Duncan refuses to take responsibility for Jenkin's death and swears his hated rival to a secret pact. Crimond may never tell anyone who actually shot Jenkin, and he must take full responsibility for explaining the accident to the authorities. Subsequently, Duncan and Jean leave England for a new life in France.

Jenkin's death leaves the Brotherhood in disarray. Jenkin's friend, Gerard Hernshaw, who proposed that they live together in a homosexual relationship, enters into a prolonged mourning. Only when he reads Crimond's book does he gain a renewed sense of purpose and direction. He talks to Rose, an aristocratic member of the Oxford set who has loved him for many years, and suggests that they live together as friends and pay homage to the memory of Jenkin Riderhood by writing a response to Crimond's unorthodox Marxist philosophy. David Crimond himself is almost forgotten except by Lily Boyne, a young wealthy widow who has been obsessively and secretly in love with him for many years. Although she plans to marry the youthful and engaging Gulliver Ashe, a penniless actor, she still pleads with Crimond to love her in return. He rejects Lily's plea, and she returns to Gulliver. The author provides a conventional ending for the novel but only for two of the secondary characters. The lives of the central characters, and their relationships to each other, have undergone changes, but there is no "happily ever after."