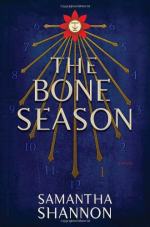 Related Topics
The Priory of the Orange Tree

Samantha Shannon
This Study Guide consists of approximately 62 pages of chapter summaries, quotes, character analysis, themes, and more - everything you need to sharpen your knowledge of The Bone Season.

This detailed literature summary also contains Quotes and a Free Quiz on The Bone Season by Samantha Shannon.

“The Bone Season” by Samantha Shannon is the story of a young girl who is extraordinarily gifted in clairvoyance. Paige Mahoney is nineteen-years old and is a member of the criminal underground in 2059 Scion-London. The city had been taken over by the Scion, a corrupt movement that has deemed clairvoyants to be enemies of the state and clairvoyant acts to be criminal. Paige works for the clairvoyant syndicate that exploits the gifts of its members. The Scion fears that the powerful syndicate could eventually take back the city for the people. Paige is a voyant (as in clairvoyant) and member of the Seven Seals. She is considered a mollisher, a protégée of the mime-lord Jaxon Hall who oversees the I-4 sector which is referred to as Dials.

The corrupt administration is in league with the Rephaim race which has overtaken an abandoned area that once was Oxford. The Rephaim race entered earth through a schism created between earth and the Netherworld. They established a prison camp known as Sheol I in what used to be Oxford. When Scion captures clairvoyant criminals, they are either sent to the tower to wait their ultimate transport to Sheol I or, if it is Bone Season, they are sent directly there. A Bone Season only occurs every ten years. The name is derived from the French word, “bonne” which means “good”. However, the prisoners at Sheol I would all agree that their incarceration is anything but “good.”

Paige possesses advanced clairvoyant skills. She is a dreamwalker and is known as The Pale Dreamer. She has the ability to “leap” into the dreamscape of another person’s brain. She sees what they see, how they see it and what they think. When she tangles with a pair of Scion soldiers when traveling by subway to her father’s house, the fight escalates and her powers take over. She murders one of the soldiers and nearly kills the second one. The soldiers hunt her down and find her at her father’s residence. After a chase and fight, they apprehend her by shooting her with a dart filled with “flux” a poison that is nearly deadly to a clairvoyant.

But Nashira Sargas, the leader and blood-sovereign of the Rephaim race wants her alive and orders that she be given an antidote. Nashira believes Paige is a dreamwalker and wants to steal her powers. Nashira is protected at all times by five guardian angels. She murdered five clairvoyants, trapped their spirits and thereby stole the powers they had when they were alive. Nashira wants to make Paige her sixth guardian angel.

Arcturus, Blood-Consort and Warden of the Mesarthim, claims her and becomes her keeper. He is betrothed to Nashira. Paige becomes XX-59-40 and will live with Arcturus, known as the Warden, at his Magdalen residence in Founder’s Tower. The Warden is a big powerful being, not human and more than 200 years old. Yet, he appears to be a young and handsome being who looks almost human except for his yellow eyes. The Warden will be training her in combat and on honing her already incredible gift – Nashira wants Paige’s gift to reach its ultimate capacity before she steals it. The Warden is charged with training Paige on how to allow her spirit to leave her body and possess the mind of others.

Paige is possessed with escaping and returning to her friends. As time passes, she finds the Warden to be kind and caring – almost human. The Warden has a lot of secrets – one of which is that he detests Nashira and had been part of a group of Rephs who had rebelled against her many years before. Another secret is a new secret – he is falling in love with his little prisoner.

Paige faces many battles and dangers on her quest to escape Sheol I and return home. She faces the wrath of Nashira, vicious red-jacket soldiers, the malevolent Sargas members and the Emim, dangerous creatures that crave human flesh. Eventually, with the help of the Warden, she is finally able to flee but she finds her parting to be bittersweet.

More summaries and resources for teaching or studying The Bone Season.