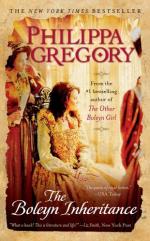 This detailed literature summary also contains Topics for Discussion and a Free Quiz on The Boleyn Inheritance by Philippa Gregory.

Philippa Gregory's historical fiction novel surrounds the lives of three women, who have, in one way or another, been affected by the Boleyn "inheritance," which is not always positive. Jane Boleyn, Anne, who is the Duchess of Cleves and young Katherine Howard are the three narrators of their individual entries in this story, which weave together and sew up a particular time in history, which is Phlippa Gregory's specialty.

This particular story focuses on the short reign of Anne of Cleves, who travels from Cleves to marry King Henry by an arranged contract. Henry made the decision to marry Anne based on a portrait of her painted by Hans Holbien. Anne was not beautiful, but the area of Cleves, at that time, was an important link that King Henry felt he needed to secure in order to protect England from neighboring European countries. Shortly after Anne arrived and became situated in this new country, it became clear that Cleves was less important, since talks with France had begun to take place. Because of this, and because the Duke of Norfolk is encouraging his fourteen-year-old niece to seduce the King, Anne is never crowned Queen.

When Anne first arrived in England, a bad-smelling, obese man, who was secretly the king in disguise, forced a kiss on her mouth to greet her. Anne was so repulsed by him, she shoved him backward and spit at him. His ego crushed, this incident set the tone for the King's dislike of Anne, and, consequently, their marriage was never consummated.http://www.bookrags.com/eic/book_formate/guideFrame.php?guide=literature&bID=9085&status=E#

The entire novel consists of narratives by the three women. The fact that each character is strategically placed allows the reader to know what is going on in court, what is going on in the Queen's bedroom and the king's mind, and what is taking place in England in general. This is a fascinating tale of a slice of time that is difficult to imagine; a time when the country's primary leader had perhaps lost his mind through illness and absolute power, and a time when women were used merely for pawns and producing children, and a mere rumor of witchcraft could send a woman to her death.