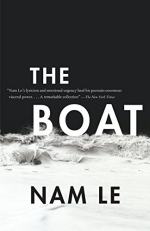 The Boat Summary & Study Guide includes comprehensive information and analysis to help you understand the book. This study guide contains the following sections:

This detailed literature summary also contains Quotes and a Free Quiz on The Boat by Nam Le.

The following version of this book was used to create the guide: Le, Nam. The Boat. Vintage Books, 2008.

Nam Le’s collection of short stories takes into its scope a wide range of time periods, locations, and historical moments. Through shifts in tone and voice, Le’s characters demonstrate vastly different cultures and customs, while all centering around questions of art, filial bonds and sacrifice, migration, and the search for meaning. Le captures each of his protagonists during a moment of limbo and transition - personal, political, or both. Written in a formal literary style featuring lyrical imagery and realistic details, the stories show how each character strives to make the passage between the person they once were and the person they have yet to become, all while being forced to face the expectations of family, country, and self.

The collection opens with the story “Love and Honour and Pity and Pride and Compassion and Sacrifice,” which interrogates how notions of authenticity and cultural identity function in the Western literary canon, particularly for nonwhite writers whose backgrounds are considered ‘ethnic.’ Narrated in the first-person, by a protagonist also named Nam, Le blurs the line between autobiography and fiction. In the story, Nam is a writer in his final year of a master’s program at the prestigious Iowa Writer’s Workshop. A bout of writer’s block coincides with a visit from Nam’s father, who is strict and silently disapproving of Nam’s chosen path. Among the milieu of American writers, editors, and teachers, Nam observes a tendency to tokenize writers of color. An agent notes that the popularity of “ethnic literature” (9), while Nam’s friend insists that writing should feature more seemingly universal truths than this, citing what William Faulkner deemed “the old verities” (10), which wind up becoming the story’s titular focus. Faced with a looming deadline, Nam decides to appropriate a story his dad once told about surviving the My Lai Massacre in Vietnam, thus conceding to the expectations of his classmates. He wakes to find his story missing, along with a note from his dad saying he has taken Nam’s story to read while on a walk. Nam feels proud as goes to meet his father along the river and discovers him standing in front of a fire. Nam then realizes that his father has burned his story, leaving Nam bereft.

“Cartegena” takes place in the slums outside of Medellin, Colombia. The narrator is a young boy named Juan who has become caught up in a criminal mode of survival due to decades of political corruption and gang violence in the country, who has claimed as a victim him own father. Juan and his friends dream of the coastal town of Cartegena, where life is more peaceful and men make their living by fishing, rather than through violence. Juan’s profession places him in danger after he intentionally botches an ordered hit against his best friend, Hernando. When Juan’s crime-boss, El Padre, learns of Juan’s failure, he summons him to his cliffside house. Fearing for his life, Juan’s friend Claudia accompanies him to the house, where El Padre appears willing to let Juan go as long as he returns his weapons and flees the region. Juan sends Claudia to retrieve his guns, and she gives him a hand grenade, which Juan takes back inside with him. As Juan and El Padre look over the hillside, they toast to the future, and Juan tells him he thinks he will go to Cartegena. At the story’s end, Juan pulls the pin out of the hand grenade and imagines a line of fisherman emerging from the sea.

In “Meeting Elise,” the narrator is Henry Luff, a prominent New York painter with severe health problems and an estranged daughter, Elise, who Henry has not seen since she was a child. She is now eighteen years old and an accomplished cello player making her first appearance at Carnegie Hall. The story takes place on the day of the concert, when Henry and Elise have agreed to meet for lunch. Throughout the day, he is haunted by memories of his long-time girlfriend Olivia, who has recently passed away, as well as his daughter, who he has missed out on knowing. After Elise stands him up at lunch, Henry walks to Carnegie Hall to confront her in person but is prevented from talking to her. He returns home and thinks of Olivia, which gives him the courage to try one last time to connect with Elise. He catches the last of her Carnegie Hall performance, and as he leaves the venue, he is swept up by a crowd of people. Briefly, he imagines he sees Elise, whose image blurs in his mind with Olivia’s. The story ends with Henry telling Olivia to wait for him.

“Halflead Bay” is a coming-of-age story set in a small coastal town in Australia. The narrative follows Jamie, a high-schooler whose recent goal in a football match earns him the attention of Alison. Meanwhile, Jamie’s mother suffers from multiple sclerosis, and the disease has progressed. His entire family has been silently bracing itself for her death, while also trying to maintain normalcy. Jamie’s involvement with Alison draws ire from the town bully, Dory, and he must face the prospects of a fight. Known by his family and community for being a “loose ball” (123) who often crumbles under pressure, Jamie wants to prove he can stand up to Dory, and secure Alison’s affection. After his parents try to intervene by taking him out of school, Jamie chooses to confront Dory at his house, where the bully beats up Jamie in front of Alison and others. When Jamie’s dad and younger brother Michael show up, Jamie ultimately realizes he will be able to count on his family for support, even after his mother is gone.

Taking place during the days leading up to American forces dropping the first atomic bomb, “Hiroshima” follows the story of Mayako, a young Japanese girl with deeply patriotic ideals. In dreamy, childlike prose, Le conveys the narrator’s stark sense of duty, to her family and her country. Due to increasing fear of bombings, Mayoko has been separated from her family and evacuated from Hiroshima to a town nearby. She and her friends pass the time exercising, harvesting vegetables, and enacting the war during playtime. Mayoko carries a photo of her family, which was taken in a port town and intended to be sent to her brother in the military. Instead, the envelope was returned, signaling that her brother has died, and as Mayoko looks at the photo, she thinks of the flash from the camera. The story ends with Mayoko sensing a light and warmth on her face, indicating the atomic bomb falling on Hiroshima, and her family.

Post- 9/11 Iran provides the setting for the story, “Tehran Calling,” in which thirtysomething Sarah Middleton flees heartbreak and personal failure by visiting her friend Parvin in far-flung Tehran. Sarah and Parvin have a complicated history as friends, and in recent years, their varying levels of political engagement and loyalty have led to a divide. Accompanied mostly by Parvin’s friend Mahmoud, Sarah feels disillusionment and confusion upon arriving in the country. Her visit coincides with Ashura, a religious holiday involving parades and animal sacrifices in the street. Parvin’s activist status places her in danger against the Iranian government and misogynistic culture. Sarah attempts to connect with Parvin but is thwarted by her own indifference and feelings of emptiness. After Parvin goes missing, Mahmoud and Sarah attempt to find her and Sarah nearly gets abducted by a band of hostile men. The pair retreat to Sarah’s hotel room, where Mahmoud gives her opium to relax her. Le ends the story without a resolution, leaving the reader to wonder as to Parvin’s whereabouts.

In the collection’s final story, themes of family, sacrifice, and suffering converge in a harrowing tale of Vietnamese refugees stranded at sea. Mai, the protagonist of “The Boat,” has left behind a beloved father, mother, and brother and joined two hundred others, hoping to find a better life for themselves outside of their newly war-torn country. Mai befriends the young Quyen and her six-year-old son, Truong, who sings folk tales and carries a weariness well beyond his age. Facing illness, starvation, and despair, Mai clings to Truong as a symbol of youthful hope and a connection to her past. The story ends in tragedy, with Truong dying in his mother’s arms as the boat finally reaches land.