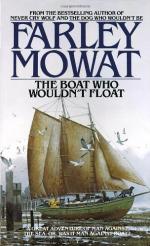 Farley Mowat
This Study Guide consists of approximately 25 pages of chapter summaries, quotes, character analysis, themes, and more - everything you need to sharpen your knowledge of The Boat Who Wouldn't Float.

The Boat Who Wouldn't Float Summary & Study Guide includes comprehensive information and analysis to help you understand the book. This study guide contains the following sections:

This detailed literature summary also contains Topics for Discussion and a Free Quiz on The Boat Who Wouldn't Float by Farley Mowat.

The Boat Who Wouldn't Float by Farley Mowat is a book of non-fiction detailing the author's fascinating and humorous journey across Canada and his stay in various parts of Newfoundland while trying to live the dream of becoming a sailor. The book begins with Mowat describing his fear of auctions. As a small boy, Mowat witnesses his father getting carried away at an auction and ended up buying thirty hives of bees and the rest of the equipment so that he could start an apiary. The strange thing was the Mowat's father did not particularly want an apiary. Instead, he just simply gets carried away. Many years later, the same thing happens to Mowat. Although the author has successfully avoided auctions for many years, he ends up at one with a girlfriend. Mowat buys and buys. Suddenly, the author is in possession of a large amount of equipment belonging to a recently deceased chandler. Mowat is destined to become a sailor, just as his father becomes a highly unsuccessful beekeeper.

Mowat meets up with Jack McClelland, a friend and publisher in Toronto. The two men drink and discuss the boat. Soon, the two men are planning to take a trip around Newfoundland the old fashioned way.

The way the story is written, it seems that Farley Mowat is born with saltwater in his veins or at least the author would like the reader to think so. Mowat is disillusioned with his life when he decides to become the skipper of a sad little schooner that he eventually names Happy Adventure. The eight-year long adventure is co-sponsored by Mowat's friend, Jack McClelland. Both men are veterans and continues to harbor a longing for the sea.

The procurement of the boat is in itself an adventure. After a great deal of time, money, and determination, Mowat prepares for McClelland's arrival in a little village known as Muddy Hole.

The boat is in bad shape and supplies are scarce. The men learn a great deal about boats and what it will take to prepare Happy Adventure for sea. There is a tremendous amount of work, time, effort, and money before the men can get out onto the ocean. The series of mishaps often stall the men but the show is meant to go on.

The story takes place over the course of eight years. The Boat Who Wouldn't Float certainly comes by her name honestly as she sinks more often than not. However, she receives a great deal of love, a celebration at Expo 67, and offers a lifetime of experiences to her owners.

It is easy to see why Mowat loves the open sea. Mowat's idealism comes through loud and clear as he sets sail. Even as the Happy Adventure meets one mishap after another, Mowat's love never wanes.

More summaries and resources for teaching or studying The Boat Who Wouldn't Float.

The Boat Who Wouldn't Float from BookRags. (c)2022 BookRags, Inc. All rights reserved.