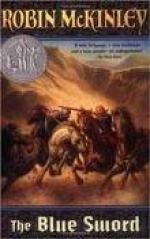 Robin McKinley
This Study Guide consists of approximately 53 pages of chapter summaries, quotes, character analysis, themes, and more - everything you need to sharpen your knowledge of The Blue Sword.

This detailed literature summary also contains Topics for Discussion and a Free Quiz on The Blue Sword by Robin McKinley.

The Blue Sword by Robin McKinley is a fantasy novel about a young orphan girl, Harry, who is taken from her privileged life in Home, and thrust into the world of the Hillfolk. Through her keeper, King Corlath, Harry learns she has magical power, and learns to use that power to help save their people from a demonic army.

Angharad Harry Crewe is a young orphan woman who is sent to live in the harsh desert of Daria with a family known to her brother, Richard. Bordered on the North by the Hillfolk, the Homelanders keep to themselves and rarely have relations with the native Damarians, although they often hear stories of the magic of the Hillfolk. With the threat of war, however, the Hillfolk King, Corlath, comes to request the aid of the Homelanders. When he is rejected, he kidnaps young Harry at the urging of his kelar, or magic.

Harry is treated well and refuses to let her circumstances defeat her. She quickly learns the way of the Hillfolk and begins to forge a rocky relationship with Corlath, as well as with a hunting cat named Narknon, and her horse, Sungold. Knowing she has kelar, Corlath has her trained for the laprun trials by Mathin, who quickly becomes a friend to Harry. Harry wins the trials, and becomes a King's Rider who wields the sword of Gonturan. She is a powerful force, and Corlath knows she is valuable for him and for his people. Lady Aerin, the original Queen of the Hillfolk, begins to visit Harry in visions, proving her power. Corlath also begins to have feelings for Harry, and Harry begins to recognize her own love for Corlath.

When the threat of the Northern army approaches, however, Harry knows she must go her own way to warn the Outlanders and to protect a gap in the mountains she believes the North will use to sneak up on the Hill army. Corlath refuses to listen to her concerns, even though he is aware of the threat. Harry and two friends abandon Corlath and his army and ride back to the Homelanders, where she gathers more supporters. As she travels, more arrive to assist Harry, the Lady Hero of Damar. She and her small army are able to defeat the demonic Northern army with magic from herself, as well as Corlath, and with the support of her friends and new allies. She returns to Corlath, fearing rejection, only to find he loves her and wishes to marry her. Harry realizes her own feelings for Corlath, and the two marry, and have several children. The Blue Sword is a story of love, hope, and the power of friendship and loyalty.