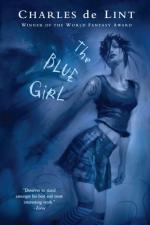 Charles de Lint
This Study Guide consists of approximately 39 pages of chapter summaries, quotes, character analysis, themes, and more - everything you need to sharpen your knowledge of The Blue Girl.

The Blue Girl by Charles de Lint is a modern day fairy tale or 'urban fantasy' that exames the themes of courage, fear, and independence through the remarkable adventures of two seventeen-year-old girls attending Redding High School in the magical town of Newford.

The story begins as we meet the character of Imogene Yeck who has only just recently moved to Newford away from her old home of Tyson because of the trouble that she was continually running into there. A toughened survivor, Imogene Yeck has to learn to let go of her aggressive, stubborn ways and to put her trust in her friends, notably her best friend, Maxine Tatrie. For Maxine, the shy, nerdy girl at Redding High, Newford, her new best friend Imogene with her dyed hair, piercings, and tattoos represents the freedom and independence, which she is never allowed to have due to her controlling mother and the bullies at school. Imogene and Maxine strke up a friendship and together learn to use the best of their strengths to combat the magical creatures that threaten them through the course of the book.

Unknown to eithet of the girls, Reddinn High School is infested with brownies or fairies who will stop at nothing for their amusement, including mistakeningly killing Adrian Drumbrell (who is now a ghost). Adrian takes a liking to Imogene's fierce attitude and defiant spirit and as he tries to get to know her, he unwittingly draws the attention of the soul-eaters.

Thrown into this turmoil, the two teenage girls have to learn how to navigate the school bullies and over-protective parents, confronting their own issues as much as the foes about them. As the darkness draws its net around Imogene, the girls have to learn how courageous they really are and what they are willing to do in order to save their souls.

More summaries and resources for teaching or studying The Blue Girl.