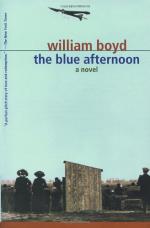 The Blue Afternoon: A Novel Summary & Study Guide includes comprehensive information and analysis to help you understand the book. This study guide contains the following sections:

This detailed literature summary also contains Topics for Discussion and a Free Quiz on The Blue Afternoon: A Novel by William Boyd (writer).

In 1902 in Manila, the European-educated Dr. Salvador Carriscant practices modern medicine in a hospital dominated by outmoded practices and medical theory. Carriscant's friend and medical associate, Pantaleon Quiroga, also practices modern medicine but is very focused on building a heavier-than-air flying machine such as an airplane. Carriscant is married to Annaliese Leys but their relationship has grown strained and distant. When he accidentally meets the beautiful and forceful Delphine Seiverance, he easily falls completely under her sway. Delphine is married, however, and the social mores of the day prohibit extra-marital affairs and easy divorce. Carriscant and Delphine contrive to run away together under the cover of a complex series of events intended to mislead their social circles into concluding they have both died in separate incidents. Only Pantaleon realizes they are in fact conducting their illicit affair. Against this narrative of intrigue, a series of three blood murders serves as a backdrop. Carriscant is enlisted by the local constable, Paton Bobby, to serve as the medical examiner. On the eve of Delphine's secretive flight, Bobby arrests the innocent Carriscant for the murders and he spends the next approximately two decades imprisoned. Meanwhile, Delphine, who was legally pronounced dead, vanishes without a trace, just as planned. The pregnant Annaliese leaves Carriscant for German New Guinea and, later, Los Angeles, where she delivers her daughter, Kay, and remarries. Annaliese tells Kay an apparently fabricated story about her biological father.

In the mid-1930s Dr. Carriscant anonymously receives a news magazine photograph depicting Delphine. Carriscant searches out Kay Fischer, his daughter, who is now a successful architect in Los Angeles. With her emotional and financial support, the couple visits Paton Bobby, a retired lawman living in the United States. The father and daughter couple then travels to Lisbon, Portugal, where Carriscant locates Delphine through lucky circumstances and intuitive deductions. During their lengthy travels, Carriscant tells Delphine the fairly lengthy story of her conception and his involvement with the murders. After Delphine and Carriscant visit, the father and daughter depart as Delphine is approaching death. Kay is then left wondering who committed the murders and why they were committed. She is also left wondering which portions of Carriscant's tale are factual and which are fiction.

The Blue Afternoon: A Novel from BookRags. (c)2022 BookRags, Inc. All rights reserved.