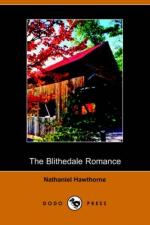 Nathaniel Hawthorne
This Study Guide consists of approximately 46 pages of chapter summaries, quotes, character analysis, themes, and more - everything you need to sharpen your knowledge of The Blithedale Romance.

This detailed literature summary also contains Topics for Discussion and a Free Quiz on The Blithedale Romance by Nathaniel Hawthorne.

"The Blithedale Romance" by Nathaniel Hawthorne is a novel of intrigue and mystery, set in post-colonial Massachusetts. The story tells of Mr. Miles Coverdale's involvement with the community at Blithedale, especially with the mystery surrounding two of the women there, Zenobia and Priscilla. "The Blithedale Romance" is a very interesting novel that reveals the secrets that exist, even within a very small society.

The night before Coverdale goes to Blithedale, Mr. Moodie stops him in the street for a favor, but he changes his mind and refuses to reveal his purpose. In Blithedale, Coverdale meets Zenobia, and Hollingsworth arrives later that night with Priscilla who clings to Zenobia. When Coverdale gets sick, Hollingsworth cares for him, trying to convert him to his philanthropic purposes, and the two men become friends. The mystery surrounding the individual pasts of Zenobia and Priscilla perplex Coverdale. The community at Blithedale learns how to farm and becomes quite adept at the art of husbandry. Hollingsworth and Zenobia begin to court, often frequenting a sloping hill on the farm where they plan to build their residence, according to neighborhood gossip. Mr. Moodie visits to check on Priscilla and seems very interested and intent on learning the details of the friendship between Priscilla and Zenobia. Westervelt arrives at Blithedale and introduces himself to Zenobia, sharing secrets about Priscilla that leave Zenobia very discomposed. One afternoon, Zenobia tells "The Silvery Veil", a legend about the Veiled Lady, frightening Priscilla by throwing a piece of gossamer over Priscilla's head at the end of the tale. As the relationship between Hollingsworth and Zenobia progresses, Priscilla seems saddened by it, and Coverdale begins to suspect that Priscilla loves Hollingsworth. When Coverdale refuses to join Hollingsworth's philanthropic schemes, Hollingsworth, Zenobia and Priscilla begin to treat him differently.

More summaries and resources for teaching or studying The Blithedale Romance.