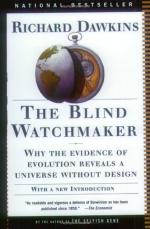 This detailed literature summary also contains Topics for Discussion on The Blind Watchmaker by Richard Dawkins.

Richard Dawkins is Professor of the Public Understanding of Science at Oxford University and he is the author of seven books, including The Selfish Gene. This book, The Blind Watchmaker, was originally published in 1987 and was reissued as a new edition in 1996. In it, Dawkins's objective is to counter the current arguments against Darwin's theory of evolution and, specifically, to educate the public in how the theory of evolution by natural selection explains the complexity and beauty of design of living organisms found in the world today.The title of the book and the initial motif is a famous treatise by the eighteenth-century theologian William Paley whose contention is, as is also that of many fundamental Christian groups and the so-called creationists, that the creation of life on planet Earth is the work of an Intelligent Designer. The subtitle of the book is Why the Evidence of Evolution Reveals a Universe Without Design.

Dawkins discusses the design and complexity of many objects in nature but concentrates, as Paley did, on the human eye and echolocation by bats. He explains how gradual evolutionary development in the natural world can easily match the most sophisticated designs of human scientists. He then goes on to describe his own computer experiments, where he emulates the process of natural selection, and examines, in detail, the working of genes and their associated DNA coding and replication to explain the mechanism of evolution.

Dawkins develops an objective and realistic appraisal of the statistics involved in miracles and the probability of life existing on other planets in the Universe. He shows the reader how to compute the statistical probability that humans are not the only form of intelligent life in the Universe and discusses theories as to how life originated on planet Earth.

In the chapter entitled Explosions and Spirals, Dawkins explains in detail how the flamboyant peacock's tail came about through the mechanism of positive feedback, and he expounds on how the various competitive scenarios between different species control the outcome of their evolution.

The incomplete fossil record, which is used to trace the evolution of different species, is dealt with in his chapter on Stephen Jay Gould's theory of punctuated equilibrium and leads to an exposition of taxonomy and the classification of all forms of living creatures. He touches on coelacanths and the Loch Ness monster and the difficulty in classification posed by such intermediate species such as archaeopteryx.

Finally, in the last chapter, Dawkins examines all the theories of life on earth, theories that can be considered as rivals to the Darwinian theory of evolution by natural selection. From Lamarckianism, through mutationism and neutralism to creationism, Dawkins makes a detailed scrutiny of each theory and finds none even come close to Darwin's theory in explaining the complexity and design of natural life as exists, today, on planet Earth.