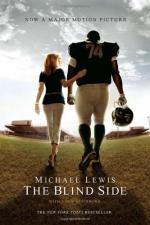 The Blind Side Setting & Symbolism

The Blind Side is the side of the field that a quarterback cannot see when he turns his body in preparation to pass the ball. Most blind side linebackers are positioned on the right side of the line in order to defend against right-handed quarterbacks.

Briarcrest is the school where Michael begins playing football and meets the Tuohy family, who eventually takes him in as their own.

Ole Miss is the University of Mississippi, where Michael attends college and plays football.

Michael's fluid intelligence is described by examiners as his ability to respond on the spot to a situation.