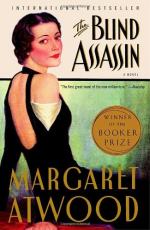 This detailed literature summary also contains Topics for Discussion and a Free Quiz on The Blind Assassin by Margaret Atwood.

The Blind Assassin is a tale of the Chase family from World War I through the end of the 1990s. Opening with the death of the main character, Laura Chase, the story is intertwined with the text of Laura's only published novel, also entitled The Blind Assassin.

The quirks and eccentricities of the once very well-to-do Chase family is chronicled from the birth in 1916 of Iris, Laura's older sister, to Laura's birth in 1919 to the death of their mother in 1925, and into the Depression and World War II. Iris narrates the lives and times of the Chase sisters. They have an absent father and a maid/nanny who raises them. There is an arranged marriage of Iris to textile tycoon Richard Griffen in exchange for desperately needed money on the part of Iris's father. Iris tells about the extramarital love affair between Iris and a political rabble-rouser and her pregnancy by the same lover. Iris narrates Laura's alleged insanity, not once, but twice, Laura's suicide, Richard's suicide, Iris's daughter's death, the estrangement of Iris and her granddaughter Sabrina, and, finally, the death of Iris in 1999.

The sub-novel follows in the footsteps of two clandestine lovers, simply known as the man and the woman. As time passes, it becomes clear that the events in the sub-novel run parallel to the lives of Iris Chase Griffen and Laura Chase and that, at the end, the two stories intersect and become one.

In the main novel, Iris is now in her 80s and is writing the Chase family history for the benefit of her estranged granddaughter Sabrina. She pines for the comfort of that relationship but blames Richard's evil sister, Winifred, for turning her against Iris. It is not until the end of the novel that readers "meet" Sabrina as an adult at the end of the novel while she travels to Port Ticonderoga to handle her late grandmother's affairs. This journey is an unrealized dream for Iris.