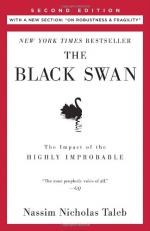 The Black Swan: The Impact of the Highly Improbable Summary & Study Guide

The Black Swan: The Impact of the Highly Improbable Summary & Study Guide Description

The Black Swan: The Impact of the Highly Improbable Summary & Study Guide includes comprehensive information and analysis to help you understand the book. This study guide contains the following sections:

This detailed literature summary also contains Topics for Discussion on The Black Swan: The Impact of the Highly Improbable by Nassim Taleb.

Nassim Nicholas Taleb built arguments to support his thesis of empirical skepticism, a different way of approaching the randomness in the world. He explained that true randomness was the unavoidable consequence of living in this place and time, and that it led inevitably to Black Swan events. These were events that happened without warning and beyond anybody's capacity to detect ahead of time. They were the big surprises in life that resulted in major game changes, such as hurricane Katrina and the 9/11 terrorist attack on the World Trade Center. Black Swan events could also be positive, such as making a big killing in the stock market from speculative investing or stumbling upon a product that made a big hit. The trick was to maximize luck, and this could best be done in capitalistic markets.

Empirical skepticism involved turning the scientific method, an inductive way of thinking, on its head. Instead of starting with a hypothesis, supporting the hypothesis with observations and experimentation, and then creating a grand theory, empirical skepticism did experimentation first and never proposed any theories. The idea was to discover what worked, not how it worked. Determining how anything worked in empirical skepticism was considered a waste of time because not all the variables could be determined, and most of the silent evidence was unknown. An example of silent evidence given was the high and unknown number of failed species for which no fossils exist.

People have developed several thought habits that helped us to deny the existence of Black Swan events. Among those listed and explained by the author were the error of confirmation, the narrative fallacy, straight denial that Black Swan events exist, silent evidence, and undue focus on a few well-defined Black Swan events.

The author attacked his detractors as being frauds and knowing it. They of course attacked back, but Taleb knew how to handle them. He did not become upset with them but simply let their emotional storms pass. The detractors were defending the bell-curve method of thinking that did more to hide the possibilities of Black Swan events than to predict anything worthwhile. The author suggested that they find more meaningful employment.

Taleb suggested that the ways to deal with Black Swan events were to maximize luck and prepare for the consequences that would arise from the events. He gave mostly investment advice, since this was how he made enough money to quit his investment career. He left it up to the reader to determine if any of his advice would be useful in day-to-day life, but he did encourage everyone to be aware that Black Swan events could happen at any moment. He also expressed regret that reality was so painful for many people. He had experienced war firsthand while in Lebanon as a teenager, living in a basement while mortar shells exploded overhead. He relocated to France but went back home to visit his family throughout the subsequent years. He met Benoit Mandelbrot, the father of fractal geometry, there and recognized that this math could help turn Black Swan events into somewhat predictable entities, but not all of them.

The Black Swan: The Impact of the Highly Improbable from BookRags. (c)2022 BookRags, Inc. All rights reserved.