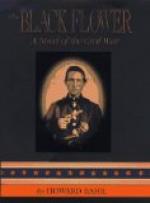 The Black Flower: A Novel of the Civil War Summary & Study Guide

Howard Bahr
This Study Guide consists of approximately 26 pages of chapter summaries, quotes, character analysis, themes, and more - everything you need to sharpen your knowledge of The Black Flower: A Novel of the Civil War.

The Black Flower: A Novel of the Civil War Summary & Study Guide Description

The Black Flower: A Novel of the Civil War Summary & Study Guide includes comprehensive information and analysis to help you understand the book. This study guide contains the following sections:

This detailed literature summary also contains Topics for Discussion on The Black Flower: A Novel of the Civil War by Howard Bahr.

The story begins with a dream being experienced by Bushrod Carter, a 26 year old soldier currently in Tennessee. Bushrod dreams that it is snowing and the ground is covered with hoe cakes drenched in molasses. Bushrod pulls away from the ranks to pick up the hoe cakes and eat them. Bushrod speaks to General Patrick Cleburne. Bushrod realizes that he had fallen asleep on his musket. At least it isn't snowing. Bushrod attempts to remember what day it is and realizes that it doesn't really matter.

Bushrod and his colleagues prepare to fight a major battle in Franklin, Tennessee. There is great detail about the logistics and emotions that accompany war. The reader is introduced to several characters, including Bushrod and some of his colleagues. Bushrod Carter, a soldier in the 21st Mississippi unit of the Confederate Army, is 26 years old. Although Bushrod is still a young man, his hair and mustache are already filled with gray. He has lines etched in his face and his knuckles are cracked. Bushrod is a veteran of every campaign of the Army of Tennessee since Shiloh and has maintained the rank of private. Bushrod had been a corporal once but lost his stripes after being accused of stealing a pitcher of buttermilk. Bushrod is a standup soldier who is well liked and respected. Bushrod's two good friends are Jack Bishop and Virgil C. Johnson.

The Soldiers arrive at the McGavock house, a two story brick house located in Franklin, Tennessee. The house is occupied by the McGavock family - John and Caroline McGavock and their children Caroline, Hattie and Winder. Also living in the house is Anna Margaret Hereford. Anna Hereford is a 24 year old unmarried woman. Anna had been sent to live with her cousins the McGavocks from her home in Lincoln County. Anna knew her father would not come as promised.

A scout approaches the McGavock house to ask John McGavock if the Confederate Army might use their house as a base while the Battle of Franklin wages on. McGavock knows this means that the house will be filled with dead, dying and injured soldiers - men whom he and his family will take care of for as long as necessary. McGavock agrees.

The main caretakers of the soldiers at the McGavock house are Caroline, her daughter Caroline and her niece Anna. The children help when and where they can. There are also officers and others to help, including two surgeons. Anna becomes emotionally involved with Bushrod and stays by his side during his stay and up to the point of his death. As Bushrod lays dying, Anna tells him that she could have loved him.

Many soldiers die in the yard and are taken to the oak grove next to the river. This is where Jack Bishop and Bushrod Carter die and are buried. Years later, Anna returns every year on the anniversary of the Battle of Franklin and walks the grounds including the oak grove and the cemetery.

More summaries and resources for teaching or studying The Black Flower: A Novel of the Civil War.

The Black Flower: A Novel of the Civil War from Gale. ©2005-2006 Thomson Gale, a part of the Thomson Corporation. All rights reserved.