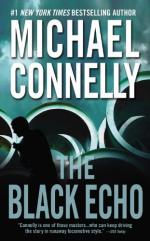 Michael Connelly
This Study Guide consists of approximately 56 pages of chapter summaries, quotes, character analysis, themes, and more - everything you need to sharpen your knowledge of The Black Echo.

This detailed literature summary also contains Topics for Discussion and a Free Quiz on The Black Echo by Michael Connelly.

Homicide Detective Harry Bosch nearly dies in the "black echo" of the water tunnels beneath Los Angeles, when he discovers how FBI agents have engineered two diamond-heists and murdered his former Vietnam buddy and an innocent graffiti artist.

A frightened young graffiti artist sees a body dragged from a Jeep into a pipe and calls 911. Detective Harry Bosch responds, recognizes a fellow "tunnel rat" from Vietnam, William Meadows, and finds evidence for Meadows' involvement in a an unsolved bank robbery. Bosch takes this to the FBI, confident they can help one another but gets nowhere with Special Agent Wish. Her boss, John Rourke, lodges a complaint with IAD, which still holds a grudge against Bosch for refusing to be part of the "Family."

Day 2 finds IAD's Lewis and Clarke confident they will get Bosch suspended by the end of the day, so he uses his remaining time to determine the eyewitness's identity. Sharkey and his crew are violent muggers of gay men, but not knowing this, Bosch feels sympathy for a kid with a terrible home life. The FBI drops its complaint, but IAD continues its tail. Day 3 finds Wish distracting Bosch, Bosch and Rourke in a testosterone contest and Bosch and Wish tangling over hypnotizing Sharkey to extract details. Wish drops by Bosch's house late at night to make up.

Day 4 sees Bosch and Wish visiting a halfway house, which yield leads to Meadows' possible accomplices and murderers. While Bosch and Wish sleep together, Sharkey picks up an ominous stranger. Day 5 begins before dawn, with a summons to Sharkey's murder scene. This death is so convenient that it suggests inside information. Rourke tells Bosch about the continuing IAD tail, which propels him to confront Lewis and Clarke about their illegal tap on his phone. Back together, Bosch and Wish learn about two Vietnamese gangsters and the imminence of a second heist. Outside Wish's apartment building, they are nearly killed by a hit-and-run driver. After they survive four hours of interrogation, Bosch and Wish go to bed.

Morning 6 begins happily but turns to conflict as Bosch hides using IAD equipment to bug Binh's phone. They capture the number he dials, track down Tran in Little Saigon, follow him to the Beverly Hills, watch him transfer his diamonds to a briefcase and disappear. Rourke dictates how they will deal with the tunnelers. Bosch is suspicious that everything is falling into place so smoothly, and Wish is troubled by the drive-by and her brother's death in Vietnam. She reveals that a visit to the memorial makes her desire justice. As morning 7 dawns following an all-night vigil, Bosch determines that Rourke is behind the robberies. The ambitious IAD tails charge in and die in a hail of bullets. Bosch lives up to his reputation as a lone cowboy - and faces his greatest fear - by plunging into the black echo. Shot and going into shock, Bosch sees Rourke killed by Wish.

Wish visits Bosch on Day 8, in the hospital, after IAD finishes his grilling and threatens to fire him if he talks to the press. Bosch is sad that Wish plans to quit the FBI. Troubled, he sneaks out of the hospital and to the station, where, listening to Sharkey's tape, puts together the pieces. After Meadows' Memorial Day funeral - and after providing a reporter enough information to report the truth using anonymous sources - Bosch confronts Wish, learns how and why she has masterminded everything (except the murders) and suggests she turn herself in. When she does, she mails the Hopper print with which they both identify - as loners in deep shadows.

More summaries and resources for teaching or studying The Black Echo.