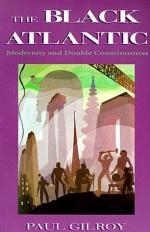 Plot Summary
+Chapters Summary and Analysis
Chapter 1, The Black Atlantic as a Counterculture of Modernity
Chapter 2, Masters, Mistresses, Slaves and the Antinomies of Modernity
Chapter 3, Jewels Brought from Bondage, Black Music and the Politics of Authenticity
Chapter 4, Cheer the Weary Traveller, W.E.B. Du Bois, Germany and the Politics of (Dis)placement
Chapter 5, Without the Consolation of Tears, Richard Wright, France and the Ambivalence of Community
Chapter 6, Not a Story to Pass On, Living Memory and the Slave Sublime
Free Quiz
Characters
Objects/Places
Themes
Style
Quotes
Topics for Discussion
Order our The Black Atlantic: Modernity and Double Consciousness Study Guide

Paul Gilroy
This Study Guide consists of approximately 25 pages of chapter summaries, quotes, character analysis, themes, and more - everything you need to sharpen your knowledge of The Black Atlantic.

This detailed literature summary also contains Topics for Discussion and a Free Quiz on The Black Atlantic: Modernity and Double Consciousness by Paul Gilroy.

Paul Gilroy is a Professor of Social Theory at the London School of Economics. His book, The Black Atlantic, is one of the pioneering works in the study of black diasporas, the spread of African blacks across the Atlantic coastline in the United States, the United Kingdom, the Caribbean, South Africa and many other nations. Gilroy focuses in particular on cultural aspects of black Atlantic identity, looking at the history of African intellectuals and the cultural construction of the idea of blackness. Gilroy is particularly focused on a critique of ethnic nationalism as excessively "essentialist" and as having the deleterious of defect as defining black and European experiences against one another. Instead, the idea of race and blackness in particular is more dynamic, differentiated and hybrid and that cultural and race theorists should look more to diversity within races than at the boundary between them.

Gilroy points out that many see the black cultures of each of these areas as defined entirely by their national experiences, like that of Africa-Americans, but he argues throughout the book that at least since the mid-19th century that black intellectuals have thought transnationally, looking elsewhere in the black Atlantic for ideas and inspiration. The book aims to demonstrate this thesis in the work of major black intellectuals like Frederick Douglass, W.E.B. Du Bois and Richard Wright.

Gilroy also argues that Du Bois's idea of the "double consciousness" of blacks is crucial to understanding the transnational experiences of the peoples of the black diaspora, as blacks were both expected to conform to their national worlds but were also simultaneously alienated from them through their common experience of the terror of slavery. Gilroy wants those who study black peoples and cultures to not only think about the marginal positions of slaves but about the more experiential aspects of their lives, such as the great psychological terror of enslavement. He repeatedly argues that the terror of slavery should be understood as an inherent part of the idea of modernity, a practice integral to the development of modern life, not merely a contingent feature of it.

One of the most unique aspects of The Black Atlantic is Gilroy's focus on analyzing the music of black cultures in the black Atlantic. Gilroy argues that music is for black people a psychological method of expressing the pain, terror and rage caused by past and continued oppression and fear that cannot easily be put into words. For people denied the ability to read and write, music was often the only way to express one's self. Further, Gilroy advances his thesis through the music of black cultures, showing the deep dynamism in the evolution of black music, how it defies categorization and illustrates the hybrid ideal of race that he hopes to use to replace an older and in his view destructive "traditional" or "roots-based" conception of what it means to be black.

More summaries and resources for teaching or studying The Black Atlantic: Modernity and Double Consciousness.