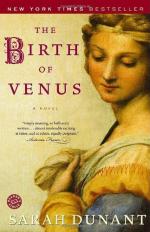 Sarah Dunant
This Study Guide consists of approximately 35 pages of chapter summaries, quotes, character analysis, themes, and more - everything you need to sharpen your knowledge of The Birth of Venus.

The Birth of Venus Summary & Study Guide includes comprehensive information and analysis to help you understand the book. This study guide contains the following sections:

This detailed literature summary also contains Topics for Discussion and a Free Quiz on The Birth of Venus by Sarah Dunant.

The Birth of Venus is a novel by author Sarah Dunant. This novel is set in thirteenth-century Florence where twelve-year-old Alessandra desperately wants to become an artist. However, it is inappropriate for a young girl to be educated, let alone pursue a passion like art. Instead, Alessandra is expected to marry and give birth to many children. Alessandra does marry, but her marriage is not traditional, leaving Alessandra with the freedom she always dreamed of having. The Birth of Venus is a historical novel that takes the reader on a journey through thirteenth century Florence through the eyes of a young woman who is both courageous and innocent. It is a novel of love and betrayal, but also a novel of personal growth that modern readers will have little trouble relating to.

Alessandra watches as her father arrives home with a painter hired to paint frescos in the family chapel. Alessandra is excited by this painter's arrival because she too would like to be a great painter one day. Alessandra reaches out to this man, hoping for some lessons on how to create the great colors he uses every day, but he rebuffs her. The painter has grown up in a monastery where it is improper for a man to speak to such a young, naive young girl. Alessandra refuses to give up, however, and the two slowly forge a tenuous friendship.

Alessandra's sister marries in a huge ceremony that brings respect and pride to both families. Alessandra watches, determined that this will never be her. However, after a time the political arena in their city changes. Lorenzo de Medici dies, leaving the city under the control of his heir, Peiro, an ineffective leader. Peiro is ousted and the city lies vulnerable as the French king prepares to march his city through Florence. Alessandra is told she will have to move to a convent for her own protection. Alessandra refuses, suggesting instead that a marriage contract be made for her.

Alessandra meets Cristoforo Langella, a charming, middle aged man from a good family. Alessandra accepts his offer of marriage immediately, believing that she has few prospects and can do no worse. Political tensions force a quick marriage and Alessandra finds herself moving into her new husband's home within weeks rather than the months these arrangements normally take. On her wedding night, Alessandra learns that her husband has married her not for love or for an heir, but because he is frightened of being revealed as a homosexual, or sodomite, under the new laws of their new government. Not only this, but Alessandra learns that her new husband is the lover of her own brother, Tomaso.

Alessandra and her husband are forced to house several soldiers from the invading French army when they arrive. Alessandra is excited by this and happy to be in the middle of history. However, as soon as the soldiers leave so does Cristoforo. Alessandra uses her free time to explore the city, but soon finds freedom to be less exciting than she had always imagined. Cristoforo returns home, but he has brought Tomaso with him, taking from Alessandra any illusions that her marriage is a normal one. Alessandra has an emotional breakdown that her husband believes is a miscarriage. To soothe her emotions, Cristoforo turns the nursery into an art studio complete with all the art supplies Alessandra has not be allowed to acquire for herself.

When Cristoforo disappears once again, Alessandra decides to go home for a visit. When Alessandra arrives, she learns the painter has had some kind of nervous breakdown and locked himself in the chapel. Alessandra convinces him to speak to her and learns that he is having a crisis of faith based on the murderous actions of a monk he thought of as a friend. Alessandra takes the painter from her parents' home and installs him in her own art studio. Alessandra's servant, Erila, tries to keep Alessandra away from the painter, but one night Alessandra hears his cries and goes to soothe him. They make love, causing Erila to panic in fear for Alessandra's safety. Erila instructs Alessandra to convince her husband to attempt the conception of an heir that day. Alessandra does and learns a few weeks later that she has become pregnant.

The chapel is completed in the early months of Alessandra's pregnancy. The painter has saved a small panel for Alessandra to do and they complete it together. Soon after, however, Tomaso, Alessandra's brother, is arrested for being a sodomite. Alessandra and Cristoforo fear he will give Cristoforo's name under torture, but quickly learn that he has given the painter's name instead. Alessandra convinces Cristoforo to secure the painter's freedom. That night, Erila drags Alessandra out of bed in the middle of the night in the hopes of a last meeting with the painter before he is forced to leave Florence for Rome. However, it turns out to be a trap set up by Cristoforo.

Cristoforo is heartbroken to learn of Alessandra's affair with the painter. Cristoforo leaves Alessandra as she goes into labor with her child. The child is born safely, but Cristoforo does not return. Alessandra is asked to go to the morgue to identify a body that has turned up in the chaos following the downfall of Savonarola. The body is not Cristoforo, but Alessandra is urged to say it is. It turns out that Cristoforo has arranged to fake his death so that he can run away with Tomaso and give Alessandra the freedom to live her life as she pleases. Alessandra decides to join a unique convent that allows her to pursue her art.

More summaries and resources for teaching or studying The Birth of Venus.

The Birth of Venus from BookRags. (c)2022 BookRags, Inc. All rights reserved.