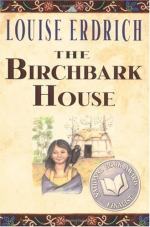 "Birds were singing, dozens of tiny white-throated sparrows. The trilling, rippling sweetness of their songs contrasted strangely with the silent horror below."
p. 2

"Most of the time Angeline was kind to Omakayas ... but there were also times her words were sharp as bee stings, and at those times Omakayas shed tears her sister never knew or probably even cared about, for as very beautiful people sometimes are, Angeline could be just a little coldhearted at times."
p. 10

"Old Tallow was so isolated by the force and strangeness of her personality that she could have been surrounded by a huge dark forest. She had never had any children, and each of her three husbands had slunk off in turn during the night, never to be seen again."
p. 19

"Perhaps they had communicated in smells. Or maybe in a language of feelings. Her terror, the bear's pity. Perhaps it was...