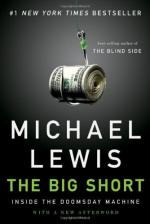 The Big Short: Inside the Doomsday Machine Summary & Study Guide

The Big Short: Inside the Doomsday Machine Summary & Study Guide includes comprehensive information and analysis to help you understand the book. This study guide contains the following sections:

This detailed literature summary also contains Topics for Discussion and a Free Quiz on The Big Short: Inside the Doomsday Machine by Michael Lewis (author).

The Big Short: Inside the Doomsday Machine by Michael Lewis is a return to Lewis' financial roots. In this book, Lewis explores the stock market crash of 2008. Lewis examines the bond market and the move into subprime mortgage bonds that led to the crash that actually took place over the long months in 2007 when the housing prices suddenly dropped nationwide. In this character driven narrative, Lewis examines the group of people who saw the crash coming and either kept quiet to protect potentially large investments or were too shocked to speak up.

In the 1980s a shift occurred on Wall Street that allowed young men to walk in off the street and become multi-millionaires by advising others how to invest. With this shift came an interest in finding more diverse ways of investing and making money. Part of this shift was the creation of the mortgage bond. A mortgage bond was a bond that included hundreds of mortgages that were offered to the American public. To make these bonds easier to sell to investors, they were divided into what was called tranches, or different levels. Due to the fact that mortgages are not always paid off when expected, the tranches would offer on the lowest level the earliest pay offs with a high interest, while the higher tranches were the ones that would mature when expected and had a low interest.

In 2005, it occurred to a money manager to short mortgage bonds, which in effect means to bet against them being paid at the appropriate time. To do this, money manager Dr. Michael Burry approached multiple banks to buy credit default swaps, or CDSs. This was like a type of insurance against the default of these mortgage bonds. If the borrowers in these bonds paid their mortgages as expected, the investor, Burry, would lose out on a set amount of money he paid semiannually in premiums. However, if the borrowers defaulted on their loans, the investor stood to gain multiples of his basic investment.

At the same time Burry was discovering CDSs or subprime mortgage bonds, an insurance company called AIG FP was building and selling what was called collateral debt obligations, or CDOs. These were a collection of the lowest and riskiest levels of mortgage bonds bundled together. Once bundled together, these CDOs would often get a rating of triple-A from the rating companies, a rating that suggested there was little risk to the investment, rather than the triple-B rating that the lower tranches of the mortgage bonds would normally receive. This made these investments more exciting for buyers and easier to sell. Soon they were selling like crazy to banks and large investors in such a fashion that they spawned a new type of money manager called a CDO manager. However, it soon became apparent most of the banks and managers dealing in these CDOs did not truly understand the nature of the market or their own product.

In 2007, the housing market began to plummet. When this happened, many of these CDSs and CDOs began to pay out and many of the Wall Street banks discovered they had no realistic idea of what this meant. Morgan Stanley found itself in debt to Deutsche Bank for $1.2 billion. Eventually the bank would take a hit of more than nine billion dollars due to the CDOs an enthusiastic bond trader sold through their bank.

As the mortgage bonds began to fail, the banks which had invested so greatly in the CDSs and the CDOs found themselves failing as well. In March of 2008, Bear Sterns went under. In September of 2008, Lehman Brothers was allowed to fail while the American government was arbitrarily rescuing other banks and encouraging the sale of still more. The mortgage crisis turned Wall Street on its head and changed it irrevocably.

The Big Short: Inside the Doomsday Machine from BookRags. (c)2022 BookRags, Inc. All rights reserved.