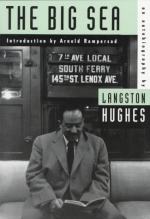 Langston Hughes
This Study Guide consists of approximately 30 pages of chapter summaries, quotes, character analysis, themes, and more - everything you need to sharpen your knowledge of The Big Sea.

The Big Sea: An Autobiography Summary & Study Guide includes comprehensive information and analysis to help you understand the book. This study guide contains the following sections:

This detailed literature summary also contains Topics for Discussion and a Free Quiz on The Big Sea: An Autobiography by Langston Hughes.

Langston Hughes is a young black boy growing up around the turn of the twentieth century. He reflects on the world around him, noting the circumstances in life related to one's skin color. As Langston grows to be a young man, he finds that he has a gift and a passion for writing poetry.

Langston grows up moving around a lot, because his mother is poor, and she is always looking for a better job. Sometimes Langston lives with his grandmother or with family friends. In school, Langston loves reading all kinds of books, and writes very good poetry. When he is seventeen, his father sends for him to come live on his father's estate for a while in Mexico. Langston's father only cares about money, and does not have time to spend getting to know his son. Langston starts college, but drops out to become a seaman, sailing to Africa for his first trip. It is hard to find jobs on ships, since many crewmen will not work with a black man. He spends some time stranded in Europe, living as a pauper with artists, and enjoys the jazz of Paris. Jazz, blues, and the Charleston have taken over Paris and Harlem, and Langston loves being around to hear the music and the laughter. It is a happy, carefree time, and everyone seems to be enlightened and letting go of racism.

Langston returns home and gets a scholarship to Lincoln College. He has already had two books of poetry published, although they have not made him any money yet. Langston makes many friends, and they love to play pranks on each other. Langston stirs up some controversy by suggesting that there should be black faculty members for his all-black college. During his senior year, Langston works on his first novel, "Not Without Laughter." He gets help and money from an old white lady who wants to encourage the publication of black literature, and the two become close friends. When Langston realizes that his patron only wants him to write things that sound primitive, to reflect what she thinks of black people, he decides not to let her pay his way anymore. The lady is very angry, and turns him out of her house. The fun roaring twenties have ended, and with the Great Depression beginning, Langston realizes that he will once again need to work for a living. He decides to make writing his life's work.

More summaries and resources for teaching or studying The Big Sea: An Autobiography.

The Big Sea: An Autobiography from BookRags. (c)2022 BookRags, Inc. All rights reserved.