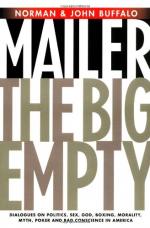 Norman Mailer
This Study Guide consists of approximately 26 pages of chapter summaries, quotes, character analysis, themes, and more - everything you need to sharpen your knowledge of The Big Empty.

The Big Empty by Norman and John Buffalo Mailer is a collection of discussions between father and son. Norman is fifty-five years older than his son, John. Not surprisingly, the "discussion" between the young aspiring writer and actor and the famous award-winning writer is rather one-sided, one that more closely resembles an interview by a young writer who wants to gain the wisdom and knowledge of an older learned and accomplished artist. There are many questions from John and some comments. However, the majority of the substance in the book is the thoughts and opinions of Norman Mailer who is obviously very bright and the book provides proof that he is also very opinionated - if there was ever any doubt!

This work was published in 2006 and much of the focus of the discussions between father and son center on the Iraq War and the administration of President George W. Bush. That Norman and John are both political and social progressives is evidenced by their comments and opinions. Norman delineates the differences between protests in which he was involved as a young "anarchist" like the march on the Pentagon in 1967 against the Vietnam War and modern day protestors. He tells his son that the protestors of today are more focused on venting their personal anger and bolstering their self-image than they are on what they are protesting. Protests that are effective are focused, organized and are led by charismatic leaders who are calm, cool and collected.

Norman Mailer gives a major speech before the Neiman Fellows on December 6, 2004. He addresses what he considers the illegal Iraq War and the many failures of the Bush Administration. In the speech, he also raises a cautionary note about the future of America. He fears that the growing powers of Corporate America will ultimately be its downfall.

Included in The Big Empty is a long interview that Norman and John did with Playboy in 2004. Norman, who was married six times and had eight children and a step-son, talks about immorality and amorality. He confesses to amorality in his life and explains how man can have many lovers but ultimately does seek someone for whom he has a deep love.

The topics of discussions that Norman and John take on run the gamut from serious issues like political correctness, racism, legalization of marijuana, fascism and existentialism to lighter subjects like Texas Hold 'Em and the sport of boxing.

What is obvious throughout the book is that young John has a great admiration for the brilliance and wisdom of his father. Both men are liberal-minded and agree on most of the subjects. The book is a testament to the mutual love and admiration that father and son have for each other.