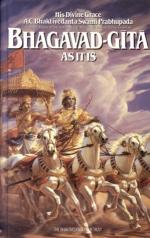 This detailed literature summary also contains Topics for Discussion and a Free Quiz on The Bhagavad Gita by Anonymity.

The Bhagavadgita is in some editions entitled Bhagavad Gita, due to difficulties of translation. While it has come to be presented on its own, at least to the English speaking world, it originally had a place within a greater work known as the Mahabarata. The work has been presented in the English language as either poetry or in prose. The version used to create this document is in poetic form.

The edition used for this summary is the Dover Thrift Edition of 1993. Readers should be aware that many versions of this world reknowned work exist. Some editions include commentaries and pictures along with the text. One can acquire versions published by those serving the academic and public markets but can also get the editions put out by religious societies. The content has typically been maintained. Even so, there are ways to get assistance with interpretation or explanations of difficult parts or greater details with some editions, including those put out by a Krishna society. If the editor or translator is listed as a name beginning with "praha..." then you have found a religious publication. Due to the variation amongst versions, students should take special care in this case to accept some differences and to not exclusively rely upon the summary as a substitute for an edition of the book itself. This is most true in the case when the text is being used for a course.

The Bhagavadgita stems out of the Indian culture and the Hindu tradition. The religious scriptures of the Hindus that came before the Bhagavadgita were the Vedas. The Vedas and the Upanishads are the names of the most important Hindu religious texts.

Within the context of Hinduism, a vast and rather complex religion, one principle that operates is that the divine can manifest in and as people. Such personages may be an incarnated god or goddess or both if hermaphroditic. Others are not incarnations of deity but are recognized as being gurus or other adepts who have attained some height or other spiritual majesty discernible by others. It is best to understand that the writing comes from such a viewpoint.

Given the above, one will more readily understand why Krishna, one of the main characters in the story is seen in his god form. He continues to inhabit and to appear as a human being.

Krishna, as a manifestation of Vishnu, educates and soothes his friend. Vishnu is the aspect of the Sustaining power of the universe and of the Divine. This aspect of the Divine is said to have 10 incarnations, the 9th of which is Krishna. Law, order and peace are the deity's main areas of interest. As such, in the Bhagavadgita readers can assume that the purpose of war is to bring proper balance into the society, otherwise Lord Krishna would not involve himself. Many of his images show him having four arms. Arjuna, who is the human hero, is faced with a very difficult battle. Anything but heartless, Arjuna has many strong feelings all of which must be faced if he is to have the strength and courage for battle. Krishna helps his friend and companion through this, but it is not easy.