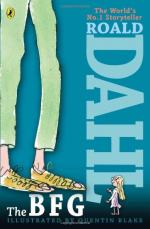 Get The BFG from Amazon.com
View the Study Pack
View the Lesson Plans
Study Guide
Order our The BFG Study Guide

Plot Summary
+Chapters Summary and Analysis
Chapters 1-3: The Witching Hour, Who?, and The Snatch
Chapters 4-6: The Cave, The BFG, and The Giants
Chapters 7-9: The Marvellous Ears, Snozzcumbers, and The Bloodbottler
Chapters 10-12: Frobscottle and Whizzpoppers, Journey to Dream Country, and Dream-Catching
Chapters 13-15: A Trogglehumper for the Fleshlumpeater, Dreams, and The Great Plan
Chapters 16-18: Mixing the Dream, Journey to London, and The Palace
Chapters 19-21: The Queen, The Royal Breakfast, The Plan
Chapters 22-24: Capture!, Feeding Time, and The Author
Free Quiz
Characters
Symbols and Symbolism
Settings
Themes and Motifs
Styles
Quotes
Order our The BFG Study Guide

Roald Dahl
This Study Guide consists of approximately 46 pages of chapter summaries, quotes, character analysis, themes, and more - everything you need to sharpen your knowledge of The BFG.

The BFG Summary & Study Guide includes comprehensive information and analysis to help you understand the book. This study guide contains the following sections:

This detailed literature summary also contains Quotes and a Free Quiz on The BFG by Roald Dahl.

Sophie, a young orphaned girl, is lying awake one night with a moonbeam shining in her eyes. She gets up from her bed in the dormitory of the orphanage where she lives to close her curtains and sees a giant coming down the street. She watches as the giant sticks something that looks like a trumpet through the bedroom window of some neighbor children and blows. When the giant turns he sees Sophie and snatches her from her room. The giant takes Sophie to Giant Country where he lives in a cave.

Once there, Sophie learns that the giant is called the Big Friendly Giant (the BFG) because he does not eat people, unlike the nine other giants living in Giant Country. The other giants are much larger and uglier than the BFG and they often bully him. These giants travel nightly to countries around the world to eat people. Sophie isn’t able to go back to the orphanage because the BFG is afraid she’ll tell others about the existence of giants and he’ll be forced to live in a zoo.

The BFG tells Sophie that he often travels to Dream Country to collect dreams, which he places in jars and blows into the windows of children. This is what she saw him doing with the trumpet in her village. He takes her to collect dreams and she finds out he can also catch nightmares. The two devise a plan to mix up a nightmare for the Queen of England to convince her of the existence of giants so that they can stop the giants from ever eating another human being.

Sophie and the BFG deliver the dream to the Queen who treats them very kindly. She orders the Army and the Air Force to follow the BFG to Giant Country to capture the giants. The BFG and Sophie lead the military there and they tie up the giants to bring them back to England where they will live out their lives in captivity.

Upon their return to England, the giants are placed in a huge pit where they will eat nothing but snozzcumbers, a terrible tasting vegetable, for the rest of their lives. The Queen has a huge house built for the BFG and a small cottage built for Sophie. Sophie teaches the BFG how to speak, read, and write better and he becomes an author.

More summaries and resources for teaching or studying The BFG.

The BFG from BookRags. (c)2022 BookRags, Inc. All rights reserved.