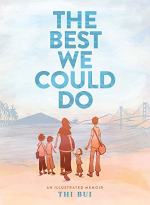 The Best We Could Do: An Illustrated Memoir Summary & Study Guide

Thi Bui
This Study Guide consists of approximately 38 pages of chapter summaries, quotes, character analysis, themes, and more - everything you need to sharpen your knowledge of The Best We Could Do.

The Best We Could Do: An Illustrated Memoir Summary & Study Guide Description

The Best We Could Do: An Illustrated Memoir Summary & Study Guide includes comprehensive information and analysis to help you understand the book. This study guide contains the following sections:

This detailed literature summary also contains Topics for Discussion on The Best We Could Do: An Illustrated Memoir by Thi Bui.

The following version of the book was used to create this study guide: Bui, Thi. The Best We Could Do. Abrams ComicArts, 2017. First edition.

The Best We Could Do a memoir, presented in a graphic novel format. The story begins in 2005 when Thi Bui is in labor in a New York City hospital. Giving birth to her son prompts her to reflect on the nature of family. It also gives her a strong sense of empathy for her own mother. Thi then introduces her family: her mother, Ma, her father Bo, her older sisters Lan and Bich, and her younger brother Tam. She, her parents, and her elder siblings were all born in Vietnam and fled the country by boat, coming to the United States as refugees in the 1970s. Her younger brother was born in a Malaysian refugee camp not long after the family escaped Vietnam. Thi was only a few years old at the time and has few memories of her native country.

As an adult, Thi wants to be more emotionally close to her parents. After a trip to Vietnam in her twenties, she begins researching her family history and asks her parents about their lives in Vietnam. She beings to trace back history through the birth stories of each of her parents’ children, including two babies who died. She then remembers her early childhood in America and the difficult relationship she and her brother had with their father who was a stay-at-home dad. She remembers their family home as a place that embodied the frustrations and challenges of being an immigrant in a new country. When she was a child, her father was a frightening figure. To better understand him as an adult, she asks him about his past.

Thi’s father Bo had a difficult childhood with a violent father. After his father joined the Viet Minh, Bo was raised by his grandparents but much of his early years were spent trying to survive the hardships and military conflicts that raged around them both during and after the Second World War. These stories help Thi to understand why her father would later transfer his fears onto his children.

Thi then tells the story of her mother’s childhood and teen years which were relatively prosperous and comparatively happy (despite a few challenging periods). Ma’s family sent her to French schools but she also developed a sense of Vietnamese pride and nationalism. After moving away from areas of conflict, Bo also enrolled in French schools and developed his own desire for Vietnamese independence. However, after visiting his father in the North, Bo was faced with the realities of life under Communism and became disillusioned with the new independent regime. He returned South and enrolled in teacher’s college where he met Ma. By this time, Vietnam had thrown off French colonial rule and gained independence, but civil war between the North and South was brewing.

Ma and Bo finished school and got teaching jobs, but life was challenging in their war-torn country. Looking back, Bo saw the conflict in a nuanced way that goes beyond the stereotypes and assumptions about the Vietnam War. Just three months before Thi was born, the South lost the Vietnam War and life soon got even more difficult and dangerous for the Bui family. Ma and Bo decided to escape the country. They embarked on a boat and set out for Malaysia even though Ma was then eight months pregnant. After a dangerous journey, they arrive safely in a Malaysian refugee camp and Thi’s brother Tam was soon born. The Buis decided to emigrate to America where they already had family in Chicago. Luckily, the family only had to spend a few months in the refugee camp before traveling to America.

In America, the children learned to adjust to their new schools, and Ma and Bo took continuing education courses since their teaching degrees were not recognized. Ma and Bo did not like the cold and sickness of North American winters, so they decided to move to California where Thi’s earlier childhood memories were formed. The family built their new life, but Thi recognizes that they were always influenced by the shadows of the past, and they hard lessons they had to learn while trying to survive. Thi wonders what traits she has inherited from her parents, their traumas, and their refugee experience. Becoming a mother allows her to see her parents in a new way, and to put herself in her mother’s shoes. She will always feel the weight of her parent’s past, but when she looks at her own son, Thi does not see the family history of war and loss in him. She hopes he can be free.

More summaries and resources for teaching or studying The Best We Could Do: An Illustrated Memoir.

The Best We Could Do: An Illustrated Memoir from BookRags. (c)2022 BookRags, Inc. All rights reserved.