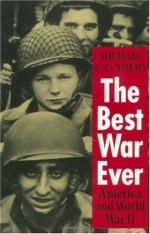 The Best War Ever: America and World War II Summary & Study Guide includes comprehensive information and analysis to help you understand the book. This study guide contains the following sections:

This detailed literature summary also contains Topics for Discussion on The Best War Ever: America and World War II by Michael C.C. Adams.

"The Best War Ever - America and World War II," contrasts the image produced by media and historians to the real horrors of war by using selective memory and glorifying aspects of the war that were misleading and even deceptive. America and the Allied democracies entered the war for good reasons and it was by all judgments of history thus far, the right thing to do. Hitler and the Third Reich, bent on world domination, had to be stopped. America had stayed out of the war that had begun in Europe in 1939 until the attack by the Imperial Japanese Navy on Pearl Harbor in 1941. Prior to that, Americans did not have the stomach to enter the war that was raging in Europe and chose to turn their heads to the the genuine and far-reaching threat that Hitler was posing. However, after the Japanese attack, there was great enthusiasm among Americans to enter the war, especially the Pacific front of the battle to avenge the attack on the US Navy at Pearl Harbor.

An underlying reason for entering the war was that Germany and its allies by that time were attacking sovereign nations, a direct threat to US economy and national security. One of the myths revealed in this book is that America and England wanted to save the people who were suffering from Hitler's policy of ethnic cleansing. The Allies were not as concerned initially about the issue as they later were portrayed to be since there was evidence of widespread antisemitism in their own nations. Another myth that is exposed in author Michael C. C. Adams' work is that the nation stayed united behind the war effort. After the initial fervor for revenge after Pearl Harbor had faded, there was internal conflict within the US about engagement in the war. In an effort to boost support for the war, movies and magazine articles portrayed soldiers as wholesome, happy men who were eager to defend their country. John Wayne, who never served in a war, became the ideal soldier, brave and dedicated. The image was further solidified by war correspondents and censors who made sure no word of the real scourges of war such as the atrocities committed by Allied soldiers and their discontent in being there never made their way state side.

The fallacies created to convince America that the war was the "best war ever" perhaps succeeded in keeping calm in the country so that the government could continue to prosecute the war relatively unrestrained, but it probably did more harm in the long-term. America was told that prosperity always follows war and that war was not the blood bath that it really was. America also learned that it could use advanced weaponry which kills millions and destroys cities and terrain without really being held accountable. Americans are still struggling with the ramifications of these inaccuracies to this day.