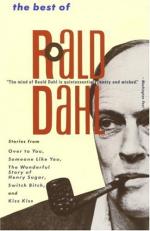 +Chapters Summary and Analysis
Madame Rosette
Man from the South and The Sound Machine
Taste and Dip in the Pool
Skin and Edward the Conqueror
Lamb to the Slaughter and Galloping Foxley
The Way Up to Heaven and Parson's Pleasure
The Landlady and William and Mary
Mrs. Bixby and the Colonel's Coat and Royal Jelly
Georgy Porgy and Genesis and Catastrophe
Pig and The Visitor
Claud's Dog: The Ratcatcher, Rummins, Mr. Hoddy, Mr. Feasey and Champion of the World
The Great Switcheroo, The Boy who talked with Animals, and The Hitchhiker
The Wonderful Story of Henry Sugar and The Bookseller
Free Quiz
Characters
Objects/Places
Themes
Style
Quotes
Topics for Discussion
Order our The Best of Roald Dahl Study Guide

Roald Dahl
This Study Guide consists of approximately 46 pages of chapter summaries, quotes, character analysis, themes, and more - everything you need to sharpen your knowledge of The Best of Roald Dahl.

England is the setting for many of the stories in The Best of Roald Dahl.

Cairo is a city in Egypt. Stag and Stuffy vacation there after fighting in Libya during World World II in "Madame Rosette."

Jamaicaappears in Man from the South

Jamaica is where the bet in the story, "Man from the South," takes place. The Englishman meets the South American and the American men who make a bet over a lighter.

The sound machine, in the story titled the same, is a machine that amplifies sounds, allowing humans to hear sounds normally inaudible, such as the screaming of flowers when they are picked.

The Cruise Shipappears in Dip in the Pool

The cruise ship is the scene of the action in the story, "Dip in the Pool."

Leg of Lambappears in Lamb to the Slaughter

More summaries and resources for teaching or studying The Best of Roald Dahl.

The Best of Roald Dahl from BookRags. (c)2022 BookRags, Inc. All rights reserved.